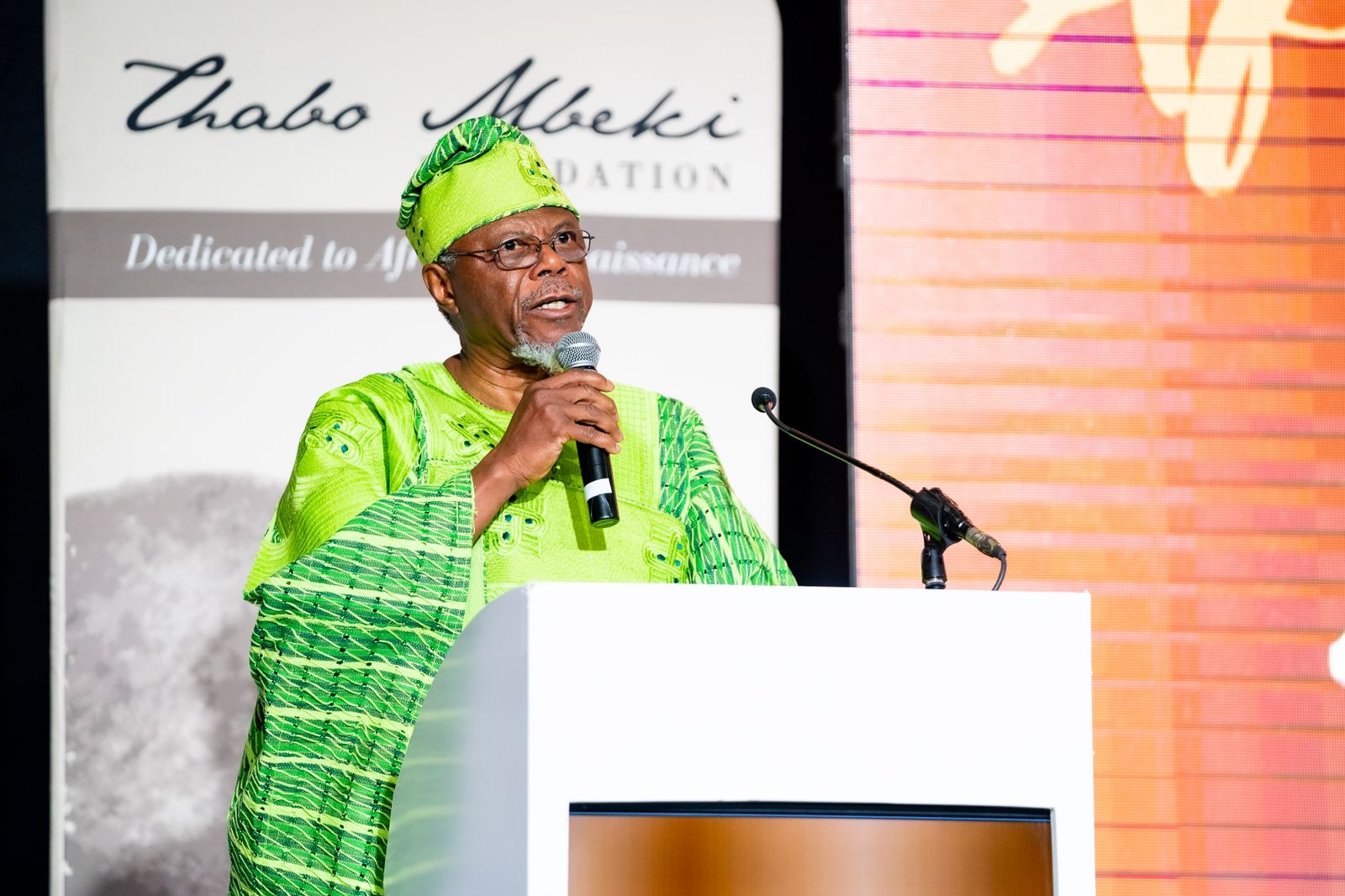 “A heavy basket cannot be lifted to the head with one hand!” I remember this Yoruba adage whose loose meaning is that one can only boast of a collective and cooperative front because an individual effort makes one susceptible to attacks and challenges. In English, we also say, “United We Stand, Divided, We Fall.” While there are variants of this adage, the point is that collective effort leads to greater success, and I think this is the foundation of the African Union that we are gathered here today to celebrate twenty years of its existence.

Nations reflect the characteristics of human nature, which explains why they operate as associations of persons with similar national and international interests and goals, with the intent of creating and providing platforms for actualising those interests and goals. In Africa, the shared and collective history has made it imperative to present a Pan-African front in creating strong, conducive, and viable organisations to help make Africa strong and independent.

The African Union is evidence of a paradigm shift in continental ideology. The African dream took on a more profound continental shape when African countries came together to achieve independence across all sectors of African life and socio-economic development. Before this, the Organization of African Unity (OAU) attempted to promote African unity and economic independence by upholding unique African social attributes and economic progress among all constituting members. However, the swing of necessity shifted in 2001 when the OAU took decisive steps to refocus its objectives and structures to accommodate contemporary matters affecting Africa and the renewal of developmental strategies to match current realities.

The African Union was founded in 2002 following a two-year process of thorough analyses of the former entity (the OAU) and current situations on the continent. Since then, the AU has taken on a new duty different from achieving independence from European colonial rule and has become more focused on preserving democratic principles.

When scholars or individuals talk about the heroes of Africa and the most important players in the continent’s transformation, they emphasize the contributions and achievements of early Pan-Africanist Africans who fought for independence during the rebirth of the continent’s cultural identity. However, as much as Africa’s needs remain, and some people champion meeting those needs and calving new transformative blueprints for the continent, the courage of African heroes continues even in recent times. The contributions of great minds like Thabo Mbeki to the progress of Africa have given flesh to this assertion.

The Organization of African Unity (OAU) started in 1963, with its basic objectives being alleviating poverty, promoting unity, protecting territorial integrity, and eradicating colonialism. The contemporary dynamics of closer international contacts, independence, and economy have necessitated the exposure of the countries to values and systems outside the continent. Following in the OAU’s footsteps, the African Union has taken on the duty of promoting pan-African ideals and protecting the interests of its member states without compromise.

Promoting democracy, human rights, and good governance has been a core focus of the Union, as its interests in these sectors have been undoubtedly obvious in recent times. The Charter on Democracy, Governance and Elections, and the Convention on Combating Corruption, including the efforts of the Department of Political Affairs, have been strategic statements of support for the continuation of democracy, good governance, and humanitarian contributions across all African countries. Many African leaders believed that the creation of the African Union was a second opportunity to develop a Pan-African centred union that would help propel the continent forward. It was expected that strategic initiatives that benefited all Africans would significantly increase African governments’ development prospects.

The poverty rate of Africans due to the unfavourable economic situations in their respective countries is alarming. As of 2019, about thirty-four per cent of Africans still live below the 1.9 USD per day poverty line, fifty-nine per cent fall below the 3.2 dollars per day, and eighty per cent live below $5.5 per day. While this might result from continental and national efforts toward alleviating poverty, it still positions Africa with many poor citizens and does not reflect development. In 2019, the estimated number of Africans living in extreme poverty was pegged at 478 million. However, due to the global commercial and economic shutdown caused by the COVID-19 epidemic, this figure climbed to 490 million Africans living below the 1.9 USD poverty level in 2021.

The African Continental Free Trade Area (AfCFTA) is a project of the African Union aimed at poverty alleviation. Through the AfCFTA, intra-African trade has increased, with processed commodities accounting for about forty-one per cent of transactions, compared to seventeen per cent in 2019. Undoubtedly, this has contributed to economic development in the continent.

However, despite the African Union’s efforts to make the continent grow economically and promote democracy, about forty attempted coups since 2010 and twelve successful ones ousted existing elected governments and replaced them with military rule. Although caused by frustrating situations of individual countries, the predominance of military coups has been a major challenge to the sworn commitment of the African Union against any assault on democratically elected government and political stability in Africa. The situation has deteriorated to the point that we now ask if coups are returning to Africa and whether the African Union has failed in its promise to safeguard democracy.

In respect of the commitment of the African Union to the newly found orientation of non-indifference and “responsibility to protect” principles, the security challenges and instabilities of the continent have put the orientation of the African Union to the test. The security problems of the continent have been gaining strength and claiming thousands of lives and properties of innocent Africans. Although this might be a primary responsibility of individual states, the African Union, more than before, is required and expected to show proactive concerns and actions on security issues of each country, especially those that directly affect the rights and integrity of Africans.

Nigeria, Kenya, Mali, Chad, the Central African Republic (CAR), Mozambique, Somalia, and others have received radical Islamist bombardment and victimisation. Continuous security challenges in Africa have been largely attributed to the breakdown of societal expectations, underdevelopment, poverty, and intolerance in these areas. I am concerned that, because these factors are unlikely to change anytime soon, terrorism and security challenges in Africa are likely to persist.

International migration in Africa has been good for the continent’s development, growth, and cooperation dreams. However, the continent is recently attacked by xenophobic attacks across the continent and, most importantly, South Africa. This problem might not have attracted the world’s attention or academia, but it has been a major threat to continental cooperation and the exchange of resources. Xenophobia and Afrophobia, although linked with misconstrued nationalism and ethnocentrism, have never been good for the developmental hopes of any country and could spark issues that might lead to intra-continental hostility. This problem must be addressed by the African Union and reaffirm the commitment of member states to ensuring that such acts are not condoned.

While African society under the collective leadership of the African Union struggles to attain development across all levels, the advent of globalisation has brought about the reorientation of the developmental plans of the world towards building sustainable development. For an underdeveloped Africa, the leaders must not stop at attaining development but ensure that every developmental strategy is sustainable and self-sufficient.

In recognition of the need to salvage the African society from continuing problems of underdevelopment and ensure social and economic growth, the African leaders and the African Union realised that there was a need to build a sustainable plan that would be inspired by Pan-African values, which is inclusive towards all African countries. The Agenda 2063 is a source of solutions that would be drawn from Africa itself and allow the continent to take lessons from the achievements and failures of the past. The plan is intended to provide enough opportunities over fifty years to positively influence the continent’s socio-economic development by 2063. The Agenda 2063 project aimed to renew and attain the full African identity, completely eradicating every form of colonialism in contemporary society, promoting good governance and democracy, including security assurance, despite the present bottlenecks.

President Thabo Mbeki’s contributions to reforming African dreams by joining in the establishing the African Union as the commencement of new African dreams cannot be overstated or left unpraised. Thabo Mbeki was one of those philosophical leaders who had a conviction about what Africa and its future should look like. He refused to be among those agitated by words alone; instead, he backed those cherished ideologies with notable actions that have made him a celebrated African visionary leader. Mbeki believed that there was a need to restructure the continent’s core agitations towards a socially imperative renaissance that could be the only leeway to change, transformation, and the recovery of African identity.

In conclusion, I borrow from Thabo Mbeki’s address at the launch of the African Union in 2002 that we must “…act together to build a brighter future, working together with all of us, governments, parliamentarians, trade unions, private sector, civil society, religious communities, cultural workers, for a better future for the peoples of Africa.”

Share
Previous The African Union (AU) At Twenty: Advances, Challenges, and Future Opportunities
Next Buhari off to Spain