December 9, 2021 Comments Off on A CONVERSATION WITH PRINCE YEMISI SHYLLON, PART 5 50 Views

The Abeokuta Prince and the Art Palace 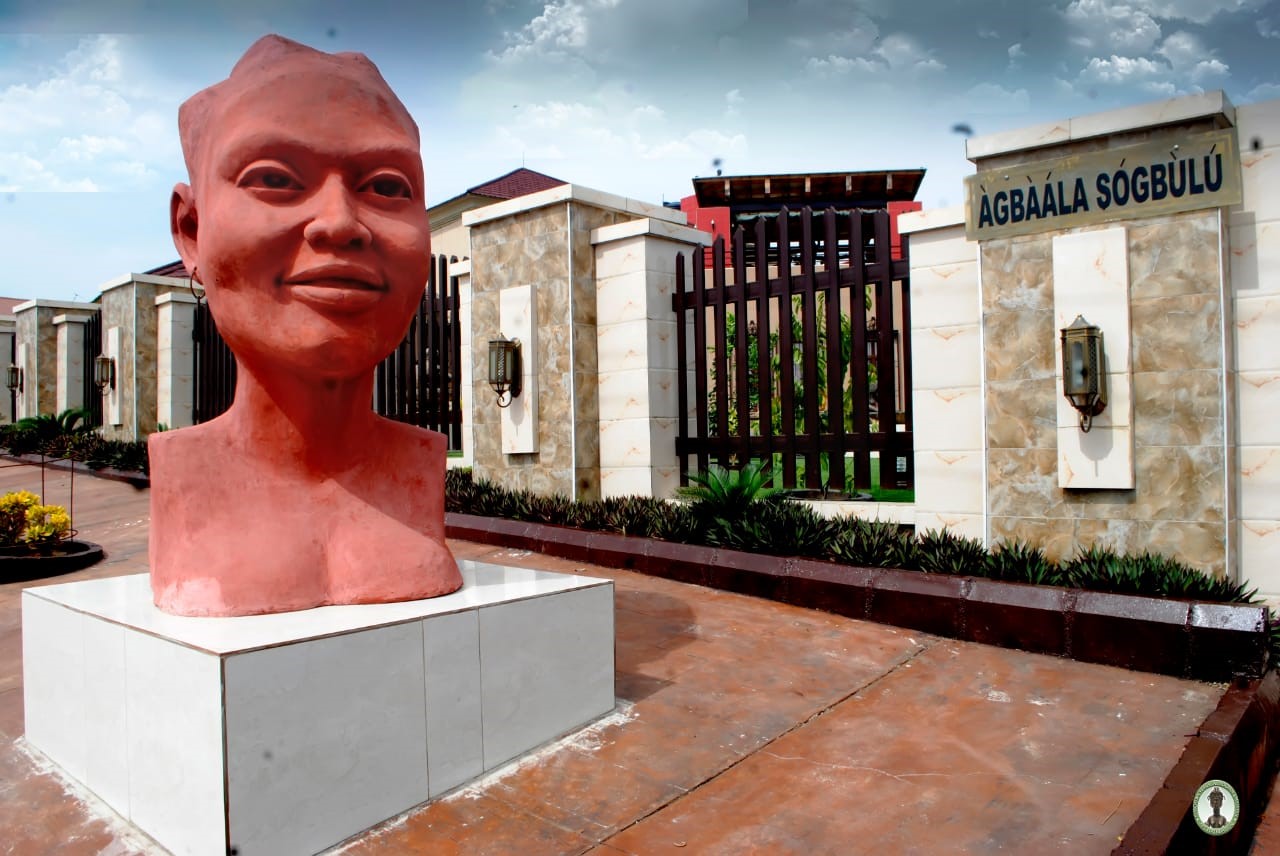 My trip to Abeokuta in November 2021 yielded treasures of performance and orality at the Ake Palace, the city itself, and the lovely home of an Egba Prince. The trip became part of what I will label, with poetic license, the Shyllon Triumvirate of Art—the arrowhead now at the Shyllon Museum located in the Pan-Atlantic University, Lagos; the second at his Mende residence in Maryland, Lagos; and the third at Hilltop, Abeokuta. The three are not repetitive, not complimentary either, but regional palatinates to fall back on yet another license. Shyllon seats as the Emperor of a Triumvirate. He devolves power in one palatinate and controls power in two. Thus far, it is a successful strategy that carries significant future risk.

Yemisi Adedoyin Shyllon is an Abeokuta prince whose passion for art has translated into a one-of-kind private art collection in Nigeria, with over seven thousand works of art—part of which have been contributed towards the establishment of Nigeria’s first privately-funded museum at the Pan African University, Lekki, Lagos. His endeavors will prominently feature in the tale of the resurgence of Nigeria’s art culture, especially at the backdrop of the country’s deprived and stunted art scene. Unfortunately, as with several other vital aspects of its socio-economic life, Nigeria’s rich cultural endowments have not been sufficiently developed to deliver their (enormous) potentials as tools for securing social cohesion, economic empowerment, and global recognition. The minimal repute the Nigerian art industry boasts of today is mostly a conglomeration of individual achievements born of the passion, skills, and efforts of generations of Nigerian artists and art enthusiasts like the famous Egba Prince. It is a situation that baffles many. This failure to judiciously harness the enormous transformative potential of the creative energies of Nigeria’s teeming young and talented population and how the innate potential in art as a tool for economic empowerment, social cohesion, and cultural assertion is lost on many. Identifying this value, countries like the United States of America, Italy, Britain, France, and Egypt (to some extent) have not only built a thriving tourist industry around their art traditions, but they have also deployed them in establishing that sense of collective history necessary for national cohesion.

By highlighting the antiquity and sophistication of their art traditions, some countries like Italy and Egypt have successfully laid claim to the origins of human civilization/modernity, while the others have found in art the basis for promoting a sense of national pride, as well as notions of cultural superiority. Even as a tool for the development of the individual, scientific studies have, in that regard, unearthed some tangible physiological benefits of art. This includes its value as a very efficient medium of expression, communication, reflection, and creative thinking. Art is also known to be an excellent form of diversion, a mood improver, and a vital component in the development of soft skills.

Perhaps, the best demonstration of the value of art to civilizations is the existence of the “Seven Wonders of the World,” great artistic creations that now stand as the enduring legacies of humanity’s greatest minds. These artistic edifices, which continue to captivate the imaginations of people around the world, centuries after their construction, include the Taj Mahal in India, the Giza Pyramids in Egypt, the Great Wall of China, Christ the Redeemer statue in Brazil, the Colosseum in Rome, Petra in Jordan, and Machu Picchu in Peru. As global landmarks, they have not only brought prestige and economic fortune to their home countries, but they also highlight the transformative value of architectural art, an art form with proven legacy potential. Some other not so grand but equally famous and prestigious artistic creations that have left the rest of the world in awe of their creators include the Statue of Liberty in New York, the Eiffel Tower in Paris, and the two famous “Mona Lisa” and “Last Supper” paintings by Leonardo da Vinci. Taking a walk through Omooba Shyllon’s premises, either at his Lagos residence or his country home in Abeokuta, one is instantly introduced to the transformative and emotive power of art. Upon entering any of the locations mentioned above, you are greeted by a breath-taking display of an interplay between vision, passion, and effort, the result of which is an excellent demonstration of the scope of human ingenuity and the extent of its emotive power. Both locations reveal a most impressive collection of artistic creations, spanning different regions of the globe in different eras—beginning at least from the 9th century. Observing the variety of sculptures, paintings, and other media on display is like walking through the scene of social evolution with a kaleidoscope of cultures at different levels of preoccupation and expertise.

Approaching his country home, Agbaala Sogbulu at Abeokuta, you are welcomed by an imposing bust sculpture of a traditional African woman cast in rust-colored metal. Upon entrance into the grounds proper, the seduction begins, casually. If the exquisitely sculptured growling tiger made from recycled incandescent metal does not catch your eye, then that of the leopard gently clutching its cub in its mouth will. If, however, these fall short of doing the magic, the cement and metal sculptured pieces—of men and women engaged in different cultural activities—scattered around the premises might do the trick. These sculptures of different sizes, colors, and postures are everywhere on the premises, outside, inside, on the balcony, and even on the roof! After whetting your optical appetites on the pieces outside, the interior reveals another ocular buffet comprised of life-sized, real-life abstract paintings, artistic sculptural representations of African literary and musical giants, and other contemporary multi-media art pieces.

However, beyond the creativity, variety, and the sheer number of artworks on display is the added appreciation of the synergy between art and architecture, embodied in the building’s design and the arrangement of the artworks, all in a serene and immaculately kept grounds. These important bits come together to accentuate the aesthetic and emotive quality of the art pieces on display.

At this point, the unfamiliar guest begins to wonder about the person behind this uncommon display of art sense and appreciation. As his title implies, Prince Yemisi Adedoyin Shyllon, or “Omooba Shyllon,” as he is popularly called, is of royal birth. He was born into the ruling house of Ake in Egbaland, Ogun State, Nigeria. He holds degrees in engineering and law from the universities of Ibadan, Lagos, and Ife, respectively. After a successful career in the private sector working as a sales engineer with the United Africa Company of Nigeria (UACN) and as a marketing director and legal adviser to Nigerite Limited, he also put some vital years into public service under the aegis of the Ogun State government. At different times, he was chairman of Gateway Tourism Corporation and Ogun State Investment Corporation.

Omooba Shyllon’s vision for developing Nigeria’s natural endowments into worthy tourists attractions capable of revamping the country’s status as a tourists’ destination first came to bear when he was the chairman of Gateway Tourism Corporation. In the said instance, he was instrumental in the “redevelopment of Olumo Rock into its current state as a major tourist site in Nigeria.” In the same vein, he has also “served as a member of the National Heritage Council and Endowment for Arts in Nigeria.” Perhaps, the finest evidence of his commitment to promoting and showcasing Nigeria’s art and culture to the world is the establishment of the Yemisi Shyllon Museum of Arts at the Pan African University in Lekki, Lagos, Nigeria.

Prince Shyllon is more than your average art collector. This fact becomes more apparent when one listens to his account of how he came about collecting art pieces. Unlike a good number of his fellow art enthusiasts, Omooba Shyllon sees value in art beyond its now popularized designation as a store of value, a mere commodity to be held and traded off to the highest bidder. His views on the significance of art, especially the possibilities it holds for Nigeria’s socio-economic recovery, are nothing short of revolutionary, attesting to a deep understanding acquired through an extensive period of close interaction with the subject, not just at home in Nigeria but also in other regions of the world where art occupies its rightful place as an important national resource.  Hence, in his own way and within his capacity as an individual, this prince from Abeokuta has endeavored to give life to his ideas, and the Nigerian art scene is the better for it.