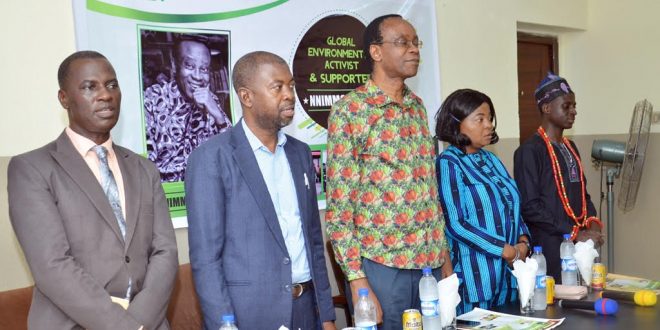 It was a celebration befitting a king. Everyone, including the celebrant was wowed by the colourful reception.

Nnimmo Bassey, eminent environmentalist, writer, architect who attracted global recognition for his three-decade long activism against environmental degradation in the Niger Delta, was honoured by a non-governmental organisation, Centre for Children’s Health Education, Orientation and Protection (CEE-HOPE) recently in Lagos.

Bassey, a staunch supporter of CEE-HOPE, co-founded the Environmental Rights Action (ERA) with the late Oronto Douglas before proceeding to establish the Health of Mother Earth Foundation (HOMEG), an environmental think-thank group.

It was a worthy birthday for a man whose fight for a healthy environment has won him global acclaims. In 2009, He was recognized by TIME Magazine as one of the 100 Most Influential Persons in the World in 2009 and the Goodluck Jonathan Government honoured him with a National Award. In 2010, he was recognised as a ‘Right Livelihoods Award winner, also known as the Alternative Nobel Prize. He is the first black man to head Friends of the Earth, an international group of 74 countries, as chairman. Nnimmo, as he is widely known, is also involved in the global fights for food security, forestry rights and general human rights. His fight for justice has also attracted to him persecutions in the forms of arrests, detention and threats to life especially under the military rulership of Late General Sani Abacha.

As part of the reception for Bassey, he was received with a parade at CEE-HOPE’s office at Ogba displayed by youths from Makoko slum community where CEE-HOPE runs works with vulnerable children and youths and which is the site of its largest programs.

A brief seminar also held at the International Press Centre (IPC), Ogba, where Bassey interacted with young people and was also showered with encomiums from past ERA staff, comrades in the human and environmental rights movement, members of the press, community representatives and others.

Betty Abah, Executive Director of CEE-HOPE and organiser of the event,  said Nnimmo, deserved a celebration for being an exemplary Nigerian, a quintessential boss who has supported the CEE-HOPE vision in the last four years plus.

‘We are celebrating a man of integrity and unflinching principles, a scholar, a workaholic and genius from whom we have a lot to learn and I am very privileged to have worked under him for over six years’, she said. Abah narrated how, on June 11, former and present staff and some family members gave Bassey a surprise birthday party in Abuja that brought together activists, government officers and several other personalities. Amidst the crowd, she said, were his old and former staff from ERA, some dating back to 20 years. ‘It all goes to show the kind of person Nnimmo is, someone who invests in the welfare and development of his staff, even after they leave, just like I have had the privilege to enjoy such gestures. He is a father to all,’ she added.

Indeed, the audience included current members of ERA including Akinbode Oluwafemi, the Deputy Executive Director of ERA, Tunji Buhari and Veronica Ivoke, all of ERA.

Mr. Akinbode Oluwafemi  said he has been motivated by Bassey who he learnt activism from many years ago.

“Nnimmo is our teacher, our mentor and we have learnt activism from him. He led us into activism even when some of us didn’t know what we were doing was activism but he taught us. Nnimmo taught me humility, I knew what humility means. I saw it in him. I have learnt a lot from him,” he said.

As part of what he learnt from the architect and poet, Oluwafemi added that people should stand up for the cause they believe in instead of complaining.

Eulogizing Bassey for his humility, Oluwafemi added that, “Today you would see Nnimmo sitting with the Prime Minister of Norway and later you see him sitting with the poor people in the Niger Delta, that is the humility we have learnt from him.”

Other participants also took turn to eulogise Bassey. A member of the board of CEE-HOPE, Mr. Lekan Otufodunrin at the event appreciated the celebrant, appreciating him for the mentorship and support for the organisation.

“There is one thing to have a vision and there is another ting to have passion but you also need help. We really appreciate the support Rev. Bassey has given to CEE-HOPE. So many advocacies are going on around the world and we thank you for all you are doing,” Otufodunrin said.

Otufodunrin, Online Editor at The Nation Newspaper then prayed for more strength and health for the man being honoured at the event.

A lecturer and activist who has been influenced by the celebrant, Dr. Tunde Akanni at the event said, “I have known him since over 24 years ago when the Civil Liberty Organisation (CLO) and other activist groups were doing activism. Rev. Nnimmo was one of those who gave the then military government sleepless nights by his activism. In spite of all his persecutions by the military, he kept on going.”

The scholar explained what Bassey meant to him and the environment in Nigeria and around the world. “He has written a whole lot of poems and I still keep and treasure my copy of his poems. He was known to be one outspoken person, he is someone that wakes up with a dream and makes sure he actualises that dream,” Akanni said.

Others who spoke include Ugomah Cokey, an Assistant Director, News at the Voice of Nigeria who appreciated the celebrant for always being ready to mentor young people, Sunday Omiogun, a chief from Agbado-Oja community in Ogun State (where CEE-HOPE also works woth girls), Mr. Adeyemi Adeyemo, Chief Executive Officer of Treasure House of Comics, Mariam Kusika, leader of CEE-HOPE’s Triple G girl empowerment club from Makoko and others.

Present also at the event was Victoria Ibezim-Ohaeri, Executive Director of Spaces for Change, an NGO.

Responding to all the comments, the celebrant, Rev. Nnimmo Bassey was full of appreciation at the event which he said was a surprise to him.

Continuing, he said, “I grew up in the village where even my parents didn’t know their birthdays and I never celebrated my birthday. I’m committed to work more with young people. I am very humbled.”

Talking to the students from Makoko who had come to grace the occasion, Bassey told them how lucky they are to belong to this generation.

“Every generation always feels their generation is better. Things may be tough but the world is getting better. When I was a young man, to make a phone call you would go and line up in NITEL office or you would tell your neighbor who had a telephone line that you were coming to receive a call by 4pm but today every family has a phone,” he said, commending young people on their tech savvy nature.

Commending and charging the youths, he said, “You young people know how to utilize technology and the future belongs to you. I want you to take all the small exercises you are doing seriously. I see you already as leaders… I see hope and I see you at the top. That is where you’ll go and nobody would stop you.”

The celebration train later moved to Makoko, a fishing community, Nigeria and West Africa’s largest slum settlement also known as ‘the city on water’ based on their peculiar housing architecture where houses are built peculiarly on stilts over the Lagos lagoon.

At Makoko, both eminent local chief and young people trooped out in hundreds to welcome Nnimmo Bassey. Four different dance troupes consisting of young people entertained him, some with songs composed specifically in his honour. They sang and danced in indigenous Egun and Ilaje languages complete with drums, native costumes and other traditional symbols. It was  a colourful affair.

Local chiefs including Chief Albert Aide, Chief Adewale Akintimehin, Baale Aji, Baale Shemedeh, Baale Sodique and many others came to honour him. Baale Aide, Baale Sodique, Chief Akintomehin and others praised the work of Abah through CEE-HOPE especially in the intervention and developmental programs for the young people of the community, especially girls.

In response, Nnimmo promised continued support for the community which has come under several forced demolition attacks from the Lagos State Government even against existing court restriction orders, destroying properties and sometimes claiming lives.

‘Slums should be upgraded, not demolished, because human lives are involved and life is sacred’, he said.

He presented educational scholarship funds to 10 Makoko children, promising to increase the number to 20 next year, after declaring open the CEE-HOPE Community Empowerment Centre.

The community, in appreciation, presented a mini boat to Nnimmo, also in celebration of his 60th birthday.

It was a crowning glory for Benin City-based, Akwa Ibom State-born Nnimmo.