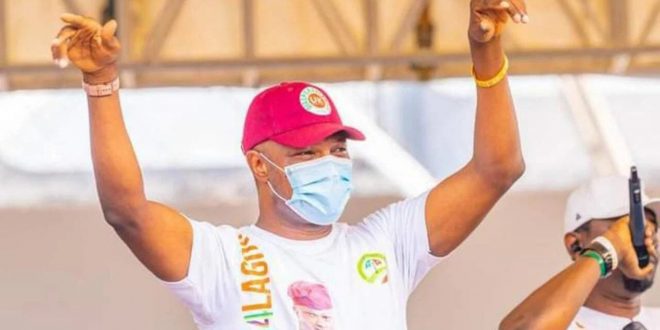 Olajide Adediran, lead visioner of the Lagos4Lagos Movement, has clinched the governorship ticket of the Peoples Democratic Party (PDP) in Lagos state.

The PDP governorship primaries were held in most states on Wednesday.

Ogidi said 775 ad hoc delegates were scheduled to participate in the primary, but 709 were accredited.

“The total number of accredited voters is 709, and Olajide Adediran got 679 votes, David Kolawole Vaughan had 20, and we had 10 voided votes,” he said.

“Having satisfied all the requirements in our guidelines, I want to announce Dr Olajide Adediran as our candidate after scoring the highest votes of 679.

“He is hereby declared the winner and returned elected.”

Four contestants — including Olanrewaju Jim-Kamal, Adedeji Doherty, Ade Dosunmu and Gbadebo Rhodes-Vivour — withdrew from the race before the commencement of the exercise.

The Lagos4Lagos movement — a group comprised mainly of All Progressives Congress (APC) supporters — was officially welcomed to the PDP in January 2022.

Uche Ikonne, the former vice-chancellor of the Abia State University (ABSU), won the PDP primary in the state.

He polled 468 votes to defeat five other contestants.

Ude Oko-Chukwu, Abia deputy governor; as well as Enyinnaya Abaribe and Emma Nwaka – both senators — had earlier announced their withdrawal from the race.

Isah Ahmed, the returning officer, said Mustafa scored 829 out of the 832 votes cast during the primary, while Saleh Shehu had no vote.

Adamu Bashir, one of the aspirants, announced his withdrawal a few hours before the commencement of the primary.

In Gombe state, Mike Oghiadomhe, the returning officer, declared Jibrin Barde as the winner of the governorship primary.

Barde, who was an aspirant in the 2019 governorship primary, decamped to the PDP in February 2021.

David Ombugadu, a former member of the house of representatives, won the gubernatorial ticket of the PDP in Nasarawa state.

“Having secured a total of 247, I thereby declare honourable David Ombugadu the winner of the Nasarawa state governorship primary election,” he said.

Mohammed Jajari was elected as the governorship candidate of the PDP in Borno state.

He polled 487 votes to defeat Mohammed Imam, who secured 362 votes.

Announcing the results, Abdulrahman Bobboi, chairman of the governorship primary committee for Borno, said a total of 849 votes were cast.

Meanwhile, in Niger state, the PDP primary was postponed till Thursday following protests by four of the five aspirants.

The aspirants — Sani Kutigi, Sidi Abdul, Abdulrahman Gimba and Abubakar Jankara — insisted that delegates must identify themselves properly before they could be accredited.

A total of 800 delegates are expected to elect the party’s governorship candidate.

Jankara, who spoke on behalf of the aggrieved aspirants, said the decision was conveyed to Lawrence Ewhrudjakpo, chairman of the electoral panel and deputy governor of Bayelsa.

The aspirants insisted that delegates must present a means of identification, which should be a national driver’s licence, a national identity card or an international passport.

Efforts by Ewhrudjakpo to get the aspirants to agree that the delegates be identified by the chairpersons of their respective local governments failed.

The Bayelsa deputy governor later informed journalists that he had directed the delegates to get means of identification.

Meanwhile, another parallel primary is ongoing at the Sani Abacha Youth Centre.

A former state and federal lawmaker, Ashiru was the party’s candidate in 2019.

He polled 414 votes to defeat his closest opponent, Sani Sidi, a former director-general of the National Emergency Management Agency (NEMA) who scored 260 votes.

Ramalan Yero, a former governor of the state, scored 28 votes, Sani Abbas had 15, Haruna Saeed, a former accountant-general in the state, got 11 while Senator Shehu Sani had two votes.

Umo Eno, the preferred candidate of Udom Emmanuel, governor of Akwa Ibom, won the governorship ticket in the state.

Philip Shuaibu, deputy governor of Edo state and chairman of the primary election committee, declared Eno the winner of the exercise which was held at the Akwa Ibom International Stadium.

Eno secured 993 votes, while a total of 1,018 delegates participated in the election.

Ahmadu Fintiri, governor of Adamawa, won the governorship primary in the state, boosting his re-election bid.

Six hundred and sixty-eight delegates participated in the election held in Yola, the capital of the state.

Sheriff Oborevwori, speaker of the Delta house of assembly, won the governorship primary in the state.

Oborevwori polled 590 votes to beat his closest rival, David Edevbie, a commissioner for finance during the James Ibori administration, who polled 113 votes.

Ibori, a former governor, is said to be backing Edevbie, while Oborevwori is the preferred candidate of Ifeanyi Okowa, the incumbent governor.

MAKINDE GETS TICKET TO STAND FOR RE-ELECTION

Seyi Makinde, Oyo governor, was declared the winner of the PDP primary, after scoring 1,040 votes to defeat Hazeem Gbolarumi, who was his only opponent in the race.

The election was held at the Lekan Salami Sports Complex, Adamasingba, Ibadan.

Titus Uba, speaker of the Benue house of assembly, clinched the governorship ticket in an emphatic manner.

A total of 851 delegates voted in the governorship primary.

Segun Sowunmi, the former spokesman of the Atiku Campaign Organisation, won the parallel primary of the PDP in Ogun.

Abayomi Daniel, chairman of the electoral committee, said 778 delegates were accredited, 702 votes were ratified while three votes were voided.

The election was monitored by officials of INEC and members of the Inter-Party Advisory Council of Nigeria (IPAC).

Siminialayi polled 721 votes out of the 890 votes cast to defeat 15 other hopefuls who participated in the election.

Agbu, who recently resigned as the PDP state chairman, secured 443 votes to defeat four other contestants in the race.

Sa’idu Umar, former secretary to the Sokoto state government, won the ticket to contest the governorship election in 2023.

Umar won the election unchallenged after four top contestants withdrew from the race.

Speaking after he was announced as the winner, Umar said: “I will continue to work hard for the success of PDP throughout the 2023 general elections and continue to remain loyal to all party’s decisions.”

“Ibrahim Kashim was the only aspirant of the party in the state and the delegates had to vote to complete due process in line with the electoral law,” he said.

Mbah received a total of 790 votes to defeat his closest challenger Chijioke Edeoga, who got nine votes.

Six hopefuls, including Mbah, participated in the election after the withdrawal of about 12 others from the race.

The hopefuls announced their withdrawal from the contest after Ifeanyi Ugwuanyi, governor of Enugu, was said to have announced Mbah as his preferred choice.

Caleb Mutfwang, a former council chairman of Mangu LGA, is the flagbearer of the PDP in Plateau state.

Mutfwang, a legal practitioner, polled 252 votes to defeat 13 other aspirants.

IN KWARA, ABDULLAHI GETS PDP TICKET

Yahman Abdullahi, a former member of the house of representatives, defeated two other aspirants to clinch the party’s ticket in Kwara.

The other aspirants were Ahman Pategi and Professor Issa Gana.

Niyi Owolade, the returning officer, said Abdullahi polled 518 out of the total 574 votes cast, while Pategi recorded 31 votes and Gana 14.

Share
Previous Why I Resigned From PDP, Presidential Primary
Next Blossom Chukwujekwu Ex-Wife, Maureen Esisi Claims A Man Offered Her N350k For A Night