3 weeks ago Comments Off on Oba Lamidi Olayiwola Adeyemi III: The Legacies of a Great King 168 Views I knew the late Alaafin of Oyo, Oba Lamidi Olayiwola Adeyemi III, at a most personal level. We had such a cordial relationship that I had his private cellphone number. Professor Akin Alao of Obafemi Awolowo University was our go-between, and he was at the palace with me many times. Oba Lamidi honored me with his presence at conferences and showed me some of his draft papers. He accepted the idea of creating a museum at Oyo. He revealed his knowledge on the depth of his understanding of Yoruba history.

When he turned 80 in 2018, Professor Siyan Oyeweso of the Centre for Black Culture and International Understanding invited several professors, including my humble self, to a conference in his honor. Ajayi Crowther University, Oyo. At the opening ceremony of this conference on October 8, 2018, I called for the creation of Alafinology as a sub-field in the broader context of kingship and argued that we could have created degree courses around divination and kingship to strengthen our indigenous knowledge system. I knew him, and he knew me. We were united in advancing the project of the enhancement of African civilization.

That was a memorable conference for reasons additional to the main objective of celebrating the Alaafin at 80. Ibadan was in an uproar over the decision by the governor, the late Senator Isiaka Abiola Adeyemi Ajimobi, to fragment the Olubadanship into dozens of other titled Obas. I was tasked with being part of the delegation to talk him out of it. It was an unsuccessful mission, with the governor telling us privately that he could use his authority to remove the Olubadan if he did not cooperate with him. We were supposed to do the talking, but the governor was then suffering from acute verbal diarrhea. Still unsuccessful was the mission endorsed by the Alaafin to speak to the Oluwo of Iwo, Oba Adewale Akanbi, over the style and substance of His Majesty’s administration. The breakout of Oluwo’s irregular psychotic episodes turned a correctional mission into expressions of condolence. October 18 was the last time I would see Chief Lekan Are. Chief Are revealed a secret: he opened his cellphone to show me the devastating data on his health conditions. He did not recover. May his soul continue to rest in peace. There remains the living, many who attended the conference, including Professors Akin Ogundiran, J. Lorand Matory, and Tunji Olaopa, who gave the major addresses. Ogundiran has become the greatest Alaafinologist in African history with his well-received book, The Yoruba: A New History, which covers a long span of two thousand years. 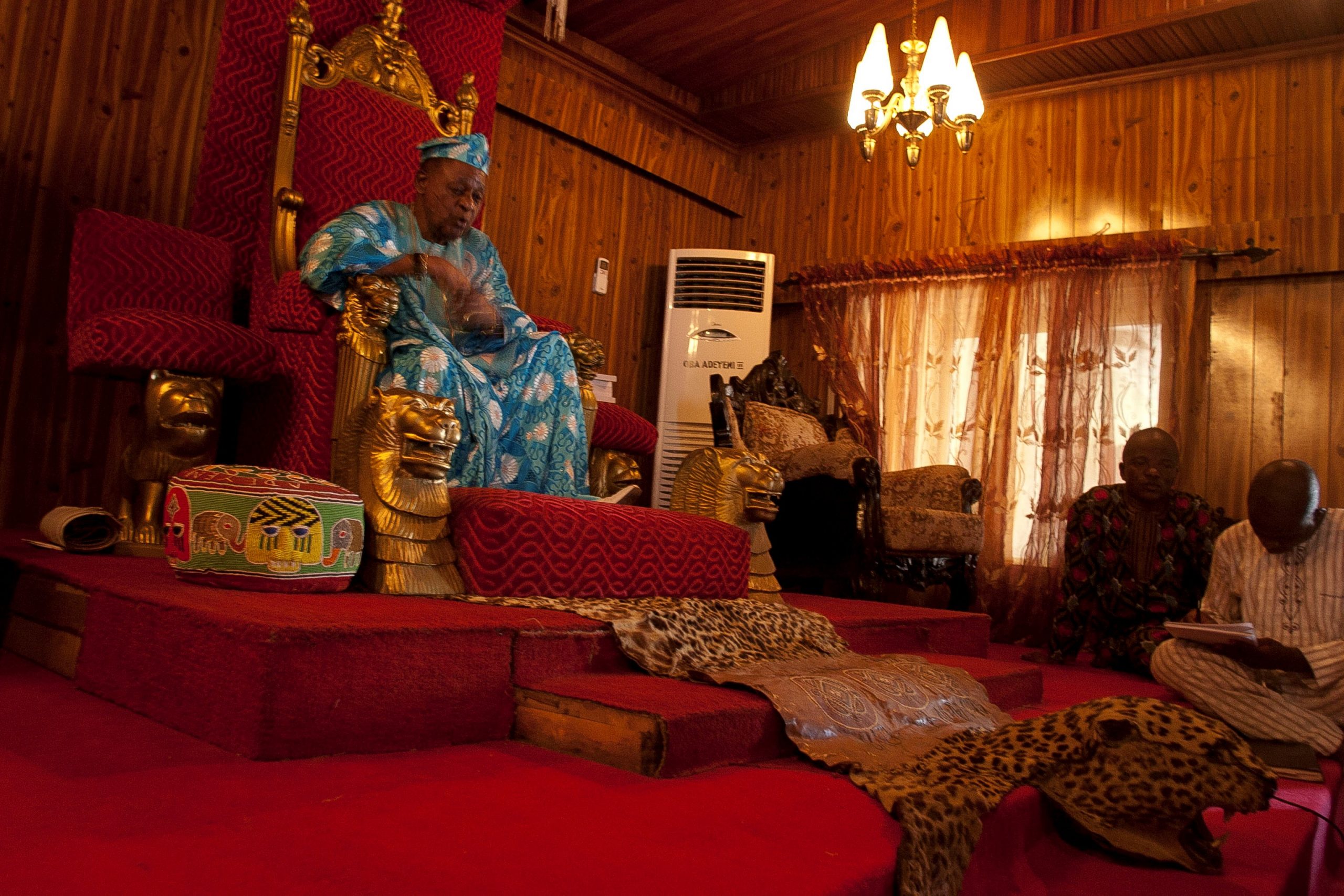 Whenever I come across a key part of his cognomen stated above—the most prominent words to address one of Africa’s most historically powerful kings—I marvel at the etymological ingenuity that went into coining such cognomen to aptly portray the power and influence of the largest empire in Yoruba history.

Yes, Alaafin remains renowned as Ikú Bàbá Yèyé, but ironically, however, death is the ultimate leveler and regulator. Only in death does the poor church-mouse measure up to the extremely wealthy; of course, that is after the fanfare and glee of the rich’s burial ceremony, not in terms of the amount spent on coffins and all the glitz. Undoubtedly, everyone gets to die, so living to witness another person’s burial is never a sign of advantage or supremacy over them. As a result, death is considered a natural phenomenon most feared, which no one, no matter how powerful, can evade.

If death is the ultimate leveler and everyone gets to die, why then are the ascendants to the throne of Oyo, the historically rich town in Nigeria, referred to as children birthed in the loins of death? Omo Iku t’iku k’ole pa, Omo Arun t’arun k’ole se. The Ikú Bàbá Yèyé appellation has its etymological roots in the words: “Ikú Ni Bàbá, Ikú Ni Yèyé,” literally translated as “Death is both the father and the mother,” the ultimate reality of human mortality and the gender-neutral anti-climax of life. It is the conquest of death in its spiritual essence. Thus, the Alaafin is not dead; rather, he only relocated his dwelling, first to the attic and then to the cloud. The cognomen signifies the depth of the Alaafin’s power and authority. Therefore, drawing such parallels between the Alaafin and death serves as a means of relating the unquantifiable nature of his power and significance.

Then, there is the “Aláàfin” appellation. Aláàfin, made soothing on the lips by transforming the two words Oní and Àaàfin — loosely translated as the “Owner of the Palace.” Now, it must take a deep sense of awe and reverence for His Imperial Majesty, the King of Oyo, to be referred to as the Aláàfin within the Yoruba nation in the context of power and authority in Africa and the world at large. So, for a people to refer to their king as “the owner of the palace,” not “the owner of a palace,” the respect and sovereignty accorded that king must be enormous. And such is the authority and power that all ascendants to the throne of the Aláàfin have enjoyed, from the first Aláàfin in an undated historical moment to Lamidi Olayiwola Adeyemi, whose life and impact we are reminiscing on today.

Oba Lamidi Adeyemi III, now alive in the company of his ancestors in the Oranmiyan compound in abode beyond the skies, ascended the throne of Oyo at a time the whole of Nigeria was undergoing a crisis. The Nigerian Civil War had just ended ten months before his ascension to the throne, and if anything, the country was not in a celebratory mood. Close to a million lives had been lost. It was also a politically tense period, with people hurt physically, emotionally, and psychologically. Any misstep from anyone, especially those in positions of power, could relapse into another war. Additionally, it was during the height of the military government that overthrew the First Republic. Coupled with the bitter taste of the dregs of the Civil War, the Aláàfin’s ascension to the throne was in a period in which any monarch could easily get confused about where their loyalties should lie and how they should form alliances.

On the contrary was a lingering story that cut deep: the story of the politically masterminded deposition of Oba Adeniran Adeyemi II, father of the recently deceased Oba Lamidi Adeyemi, in 1955. Thus, Oba Lamidi Adeyemi III ascended the throne in a politicized atmosphere that required him to be cautious, both for himself and his people. The politicians who humiliated his late father were still alive. The precarious situation shaped the philosophy of the longest-reigning king of Oyo: be bold, be truthful, and be wary of poisonous snakes in human skin.

The late Aláàfin, Oba Lamidi Adeyemi III, who reigned for 51 years and 5 months, was one of the most progressive kings of his era, both in Yorubaland and throughout Nigeria. Deeply rooted in the Yoruba belief system, traditions, and history, His Imperial Majesty was proof that education must be combined with culture to produce knowledge. The Aláàfin was known for his diplomatic and strategic approaches to political affairs. He drew his friends close and his enemies closer. He was a deep-thinking and progressive monarch who earned the love and respect of his people and other kings alike. His influence spread beyond Oyo State to the Southwestern part of the country and even to other parts of Nigeria. He was a man who wielded power democratically and commanded respect from his strategic position in Oyo-Ile.

Until his last days, Oba Lamidi Adeyemi III was an active ruler and considering that he was a king who transcended different periods in Nigeria’s existence and evolution, it is applaudable and worthy of remembrance to note that the enthusiastic Oba Adeyemi who ascended the ancestral throne of power in 1970 remained relevant and vibrant until his 83rd year when he journeyed to Baara. He was a king who witnessed the different aspects of the Nigerian state — both military and democratic — and their attendant characteristics. Despite the sour history that preceded his ascension to the throne, he remained relevant even with the transition of time and approaches due to the way he intensified the need to unify the people of Oyo. The Aláàfin extensive political acumen made him the Head of the Council of Obas in Oyo State for a very long time.

Oba Lamidi Olayiwola Atanda Adeyemi III was a man who knew how to rule. He was not oblivious of the need to be close to the people while ensuring that familiarity did not breed contempt. He was close enough to spend time with the Oyo people and win their respect; yet he was quick to make moves to warn those who wanted to plot against him. His Imperial Majesty showed political prowess and demonstrated that not all political power was lost. Aláàfin never shied away from promoting the Yoruba culture and people. He was a man who had his people, beliefs, and traditions at the core of his system, as evident in the way he gave precedence to Yoruba religion and Oyo traditional practices.

On October 24, 2021, we hosted Aláàfin Oba Lamidi Adeyemi III on the Toyin Falola Interview series. It was not my first encounter with him, but it was many people’s closest interaction with him–an encounter that helped them to see the Aláàfin from some newer perspectives. During the interview, the Aláàfin addressed the state of traditional rulership in Nigeria, the state of our institutions, belief systems, and cultures, and the role that he and other like-minded Obas played in ensuring that the traditional institutions were preserved. He was a king who did all he could to keep traditions and institutions alive. Remarkably, he was never wont to give his take on issues. He was diplomatic, yes, but fearlessly so. The transcripts of the interview with the Aláàfin have now become a permanent record:

Until he took his last breath, Ikú Bàbá Yèyé, the Aláàfin of Oyo, was an energetic, people-embracing, knowledgeable, and powerful monarch. His sheer knowledge of the Yoruba nation, founded on his education in history at strategic cultural institutions, including at the Alake’s Palace, where his father sent him for socialization, was remarkably profound. The demise of the Alaafin has left a void at the core of the Yoruba nation. History, power, alliances, collaboration, and politics will not be the same with the transition of Oba Lamidi Adeyemi III to the realm of ancestors, where he is now ruling in the unseen world.

For a monarch of Yoruba extraction to sit on the throne of his ancestors for more than half a century, surrounded by the powerful (and much-dreaded) Oyo Mesi, the Ultimate Council of Kingmakers, this Alaafin was a regal, spiritual and political enigma whose reign will be indelibly carved in the annals of Yoruba history,