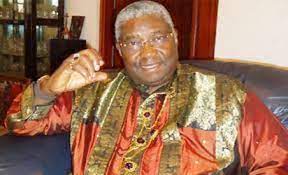 Alabo Graham-Douglas, a former minister of aviation during the regime of General Ibrahim Babangida in 1999, is dead. He was 82.

He was said to have died at a private hospital in Abuja on Monday Graham-Douglas was appointed Minister of Labour and Productivity in 1999.

He also served in the administration of former President Olusegun Obasanjo as Minister of Tourism.

The late minister who hailed from Rivers State was born on May 8, 1939, in Abonnema in the Akuku-Toro Local Government Area.

He attended secondary school in Lagos and Port-Harcourt and studied at Acton Technical School, London from 1963 to 1965, before proceeding to the University of Lagos where he studied from 1965 to 1969 and earned a BSc. in Botany and Zoology. The former aviation minister worked with the Nigerian Petroleum Refinery Company, Port Harcourt between 1969 and 1977.

He was chairman of the Binterteco Nigeria, Pabod Finance and Investment, and Waterglass Boat Yard.