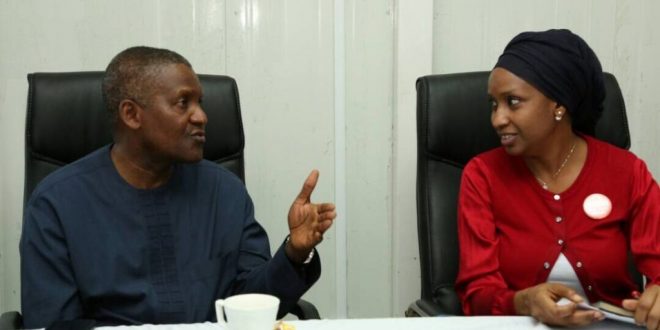 Facts have emerged how the embattled Hadiza Bala-Usman, the suspended Managing Director of Nigerian Ports Authority (NPA) lost her job. Her suspension NPA is linked to the preferential treatment accorded the Africa Richest man  and President of  Dangote Groups, Alhaji Aliko Dangote.

Usman, for about eight  made efforts to  be reinstated to her former position , but in vain, She has since been replaced by Mohammed-Bello-Kolo, a member of the board of NPA

Bala-Usman’s many ‘sins’ which earned her a suspension by the presidency on the recommendation of her supervising minister, Rotimi Amaechi, in May 2021 include but not limited to undermining Amaechi’s authority, particularly over the manner she was re-appointed for a second term of five years, without recourse to due process; failing to remit N165 billion operating surpluses to the federation account; issuing exemptions, granting waivers, rebates and tariffs without requisite approval and acting beyond her authority.

Some of these waivers were granted to NECONDE Energy owned by Ernest Azudialu-Obiejesi; Port and Terminal Operators, despite an outstanding debt, which the company owed NPA in the sum of $100,985,846.83, and giving an import waiver to Africa’s richest man, Aliko Dangote.

We gathered that the waiver granted Dangote generated the most furore and this may perhaps, not be unconnected to the fact that the Kano-born businessman had enjoyed an unprecedented number of waivers from government over the years, thereby giving him an edge over his business competitors.

In 2019, Bala-Usman unilaterally granted a waiver to Dangote Cement Plc on applicable tariff for the export of cement/clinkers. The waiver was said to be discriminatory in nature as it did not apply to other players in the industry.

It wasn’t until two years after, that a waiver was extended to other companies involved in the export of clinkers. To further investigate her five-year tenure, which is believed to have been fraught with unprofessional conduct, Amaechi set up an 11-man panel charged with specifically examining and investigating the circumstances that led to the termination of other NPA contracts and confirming compliance with the terms of the respective contracts, court ruling and presidential directives.

We had exclusively reported that the panel found Bala-Usman culpable after its investigation and the Ministry of Transportation promptly issued her a query which she responded to, denying all allegations and insisting that she was innocent of all that she was being accused of, while also outlining reasons why she took certain decisions. Unfortunately, her response did very little to change the next course of action, which was to quickly replace her with Bello-Koko who was in acting capacity already.

It is instructive to note that Bello-Koko is no stranger to Amaechi. Their paths crossed over 10 years ago when he was a senior staff of Zenith Bank. He was the accounts officer for all of Rivers State Government’s bank accounts domiciled in the bank when Amaechi was governor.

While the duo has obviously enjoyed a mutually beneficial relationship, the same cannot be said of both Dangote and Bala-Usman. Through Bala-Usman, Dangote’s business has enjoyed a tremendous boost, but he has been unable to come through for her during her ordeal – from her suspension to being issued a query and her outright sacking.

It was reliably gathered that it was only Governor Nasir El-Rufai  of Kaduna  State that openly defended Bala Usman, his former chief of staff. He did not mince words describing her suspension, investigation and sacking as a witch-hunt while vouching for her as a woman of integrity. But his intervention did nothing to help her case.

Bala-Usman who is a card carrying member of the ruling All Progressives Congress, is probably gnashing her teeth somewhere and regretting some of her actions at the helm of the NPA. Given a second chance, Dangote would most likely never again feature in any of her consideration list.