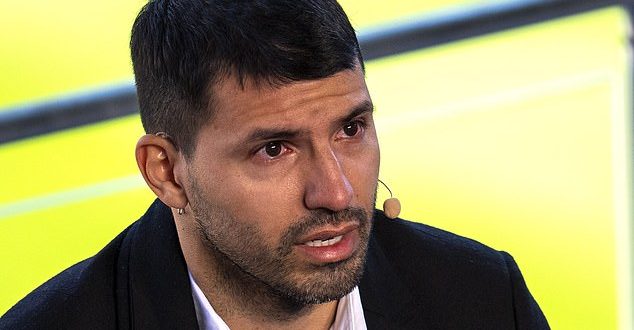 Barcelona and Argentina striker Sergio Aguero on Wednesday announced his retirement from football at a tearful press conference, just over a month after the 33-year-old was diagnosed with a heart problem.

Aguero has not played since the end of October, when he was taken off during the first half of Barca’s draw with Alaves after experiencing chest pain.

Barcelona later announced that the discomfort had been caused by an arrhythmia – a broad term to describe any heart rhythm that is not completely normal – that would require treatment over a three-month period.

The former Manchester City forward has since had regular cardiac exams to monitor his health, with the results advising him it would be a risk to carry on with his professional career.

He announced his retirement at a news conference on Wednesday, joined by Barca president Joan Laporta.

An emotional Aguero said: “This conference is to announce I have decided to stop playing professional football. It is a very difficult moment. The decision I have taken for my health; the problem I had a month and a half ago.

“I have been in good hands with the medical staff. I made the decision 10 days ago after doing everything possible to have some hope of playing on. I am very proud for my career. I always dreamed of a professional career since the first time I touched a ball at five.

“I want to thank Atletico Madrid, who took a chance on me when I was 18, and Manchester City – everyone knows how I feel about City and how well they treated me there.”

Barca legend and City manager Pep Guardiola was in attendance at Camp Nou alongside director of football Txiki Begiristain. The entire Barca first-team squad and representatives from Aguero’s former clubs were also present.

“Sergio, I think, as we just saw, we are left with deep joy and excitement with what you could have been here at Barcelona, but anything you need with your condition we are here at your disposal,” Laporta said.

“You will be remembered not just as a player, but as a friend. A new journey awaits, and I am sure it will be just as successful. You deserve it.”