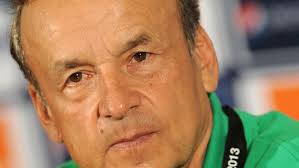 The minister of sports and youths development, Sunday Dare said the head coach  of Super Eagles, Gernot Rohr, will know his fate next week .

The minister said this during the weekly ministerial meeting in Abuja on Thursday,

This development is coming days after Nigeria played a 1-1 draw with minnows, Cape Verde, to book a place in the next round of the 2022 World Cup qualifiers.

The outing of Tuesday had renewed the call for the sacking of the Franco-  German  who has been in charge of Super Eagles since 2016 but Dare said a decision on Rohr’s future would depend on a report to be submitted by the Nigeria Football Federation(NFF) in the coming days.

According to him, the football body’s report would contain a review of the team’s performances in recent times.

The disclaimer came after several publications reported that Rohd had been relieved of his duties.

But NFF in a statement issued on Thursday refuted the claim , adding that “we have not taken a decision to sack Rohr”

The statement, however, added that “the Board of the NFF is studying the report of the Technical Committee, which is submitted after the match against Cape Verde in Lagos on Tuesday.”

“There are a number of possibilities, but we have not taken a decision to sack Gernot Rohr. I want to assure you that whatever decision is eventually taken will be one that will please the generality of Nigerians,” it read.

“Mr Rohr has a contract with the NFF, and there is a procedure for disengagement. If we get to that bridge, both parties will look at the contract and see what has to be done both ways.

“The Super Eagles squad is a national asset, and we are just fortunate to be in that space to take decisions. Any decision we take must be what will be acceptable to Nigerians from far and near.”