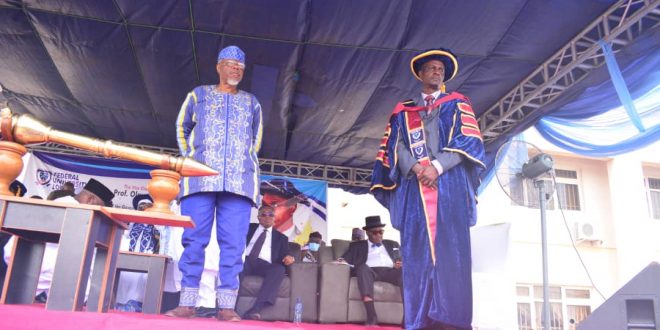 Lokoja: Reminisces of History and Culture

November 13, 2021 Comments Off on Lokoja: Reminisces of History and Culture 47 Views

Gratitude Speech Following the Award of a D.Litt. Honorary Doctorate from the Federal University, Lokoja

On this glorious day, November 13, 2021, I reminisce on my memories of Lokoja and how they form a part of an ever-growing history of the Meeting Point, the capital city of Kogi State, Nigeria. As I traveled from Ibadan to Kaduna, and from Ibadan to Makurdi in the 1970s and 1980s, Lokoja was the favorite food center between the South and the North, I had crossed the ferry at Lokoja before there was a bridge. I have been to Lokoja multiple times, and now, I have come to make my own history here.

Society. Culture. People. These are the core elements of human civilization and existence, and at the heart of the triad is a human-discovered natural phenomenon – history. As long as time passes, people interact, cultures mingle, and societies exist, history will always be, in whatever form, whether pure or corroded, written or oral. Therefore, the importance and study of history is unquestionable, for history is a phenomenon bound to exist as it helps shape human civilizations. A people and a nation who wish to grow and progress will never joke with their history or with the history of others around them. Their history will give them insights into how things were, what has changed, and what needs to be done to either match up to how things were or to do better than before. In history lies pride and glory, the fulfillment of knowing about the exploits of one’s predecessors, and the interconnectedness of the world even in a pre-internet era. 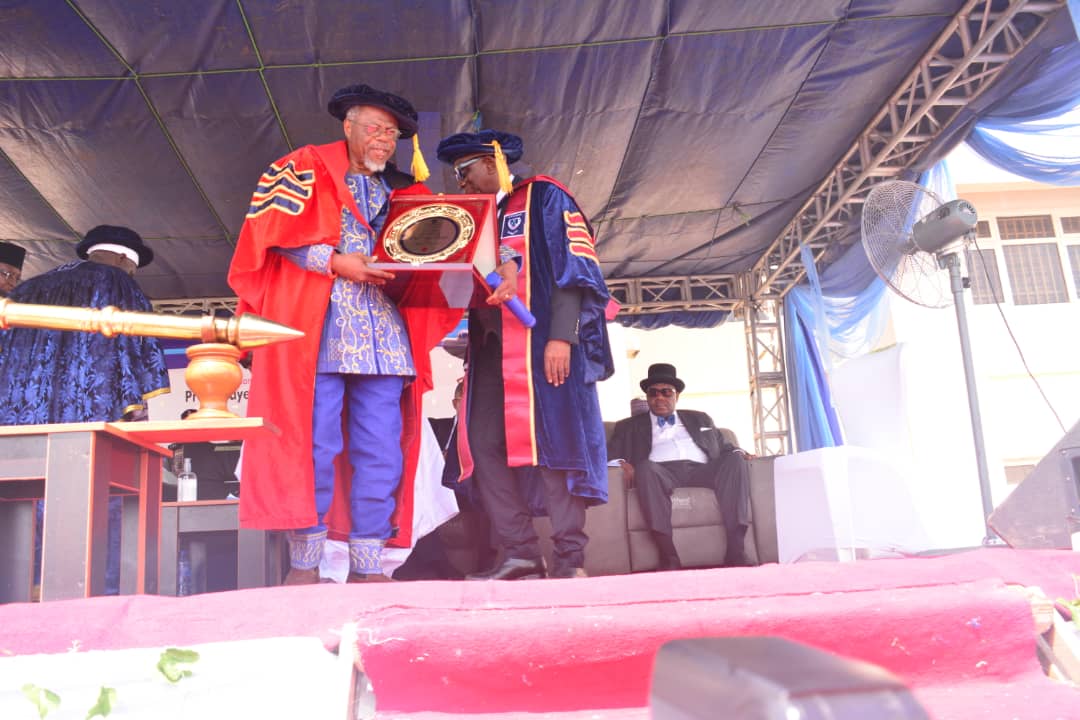 History is life in itself – the long bridge that links the past to the present and the present to the future. Through history, which brings us a knowledge of what was, we can draw insights into why what is, is as it is, and also imagine what will come. Such is the intellectual beauty of this field of human endeavor to which some of us have chosen to dedicate our lifelong learning and research. To be a student of history is to be a student of life. Thus, we all are students and custodians of history. Have you seen a group of people fiercely defend their tradition and talk about how things were done and upheld in times past? Have you watched the fire burn in their eyes as tales are recounted? History is life – lived, breathed, and reminisced on.

Lokoja is a city clothed in history. The history of Nigeria as a nation cannot be complete with Lokoja missing. Of course, there is the pre-colonial history of the city, one that links several ethnic groups, including the Igbo, Hausa, Nupe, Ebira, Jukun, Tiv, Yoruba, and many more. It is no surprise that the people of modern-day Kogi State and their neighbours have many things in common – including the love for pounded yam. Pre-colonial Lokoja dwellers were mainly hunters and gatherers who found a haven in the Patti Hills, which served as their abode of security.

In the mid-1800s, the Europeans began their expeditions on the African soil, and with these explorations came attraction and their presence on Lokoja soil, then industrialization. The first sign of alien presence in Lokoja was for commercial purposes when European merchants set up trade there. It was easy for them to do this, seeing that the city was close to two mighty rivers and had its own port. Colonial history wrongly credited William Baikie for establishing the city that we now know as Lokoja, that prior to his coming, there was only an expanse of land and a people who lived on the hills rather than in the valley. In the colonial records, it is stated that Baikie, an explorer from Scotland, convinced the people to descend and occupy the plain ground that we call Lokoja today. But the truth is, Baikie met people in Lokoja, and that was why he could live there!

Soon came the infamous sharing of the African continent among European superpowers and the granting of commercial and administrative rights to the Royal Niger Company. The British government granted control of the territories around the Niger to the Royal Niger Company conglomerate, who controlled Lokoja and saw to the success of commerce in the city. Lokoja’s favorable climatic conditions and strategic location positioned it as a vantage administrative point, making it the choice city for the administrative headquarters of the Northern Protectorate in an area that would later become Nigeria. Sir Fredrick Lord Lugard, then High Commissioner of the Administrator of the Northern Protectorate, administered from Lokoja. The amalgamation of the Northern and Southern protectorates came in 1914, and the newly unified colony was named Nigeria, according to the suggestions made by a journalist, Ms. Flora Shaw, in one of her articles. The amalgamation of the protectorates into one colony was announced in Lokoja, and although Lagos served as the first official capital of the unified colony, Lord Lugard lived in Lokoja. Today, there are cultural heritages that point to the colonial period and the life and times of Lugard in Lokoja.

Federal University, Lokoja, is one of the more recent heritages of this confluence city of rivers and cultures. Founded in 2011 by the government of Nigeria, the Federal University Lokoja is one of the fastest-growing universities in the country, with a commitment to develop its engineering and medical schools. Thanks to committed and visionary members of various faculties, the university is aiming for its place among Nigeria’s bests. I am particularly interested in and delighted by the continually growing Department of History and International Relations. It is wonderful to see that the bedrock of colonial history in Nigeria is not lacking in historical studies.

When a man of history is at the helm of affairs, the difference would be clear. The simple reason for this is that such a learned person would know the importance of following the fundamental principles of historical approach – of looking into the past, how it affects the present, and how to make the future better. Professor Olayemi Akinwumi, the current Vice-Chancellor of the University, is a learned and vast man in history. Erudite, widely-published, and a cerebral scholar, Professor Akinwumi has brought his best to ensure that the wind of change drives through the Federal University Lokoja. And that is what it means to be a student of history and apply historical perspectives in addressing issues. Also, with the likes of Prof. Mohammed Audu, a seasoned academic and the Deputy Vice-Chancellor (Academic), Prof. Emmanuel Bala, Deputy Vice-Chancellor (Administration), Suleman Obansa (the Registrar), Silo Shilo (the Bursar) and Dr. Serah Yani (Librarian), Lokoja can only do better and leap beyond expectations.

Federal University Lokoja is a place where history holds sway and is highly recognized. And since I am and will forever be a man of and studier of history, it gave me immense joy when I received a notification of the conferment of an honorary doctorate on me. There are many such honorary degrees that I have received; however, this will rank among the memorable to me, knowing that it comes from a place where history is known and recognized – a place any historian could call home. I was also asked to plant a tree to mark the occasion, a tree whose growth will be symbolic of my presence. So also is the plant that I commissioned, a symbol of light to bless the University. It was a privilege to welcome the Chancellor and members of Council and other guests at the major dinner of the convocation ceremonies. Yet another of significance was my choice to thank the University on behalf of all the honorees.

It brings me joy to have the National Conference of university in my honor. Dr. Uzoma Osuala, the brain behind this idea, is first-rate organizer.  The selection of “Insurgency, Armed Banditry and Ethno-religious Conflicts in Central Nigeria” as the theme for this conference is a well-thought-out one. Seeing as the Nigerian state is currently rocked by sovereignty-threatening breaches in security, it has become expedient for us, academics, to discuss the issue at hand to generate large discourses and spark the light for change. Thus, on November 10, 11 and 13 the Federal University Lokoja gave me triple honors—a conference in my honor, an opportunity to give the Keynote Address, and an honorary doctorate—which I am sure will sustain the manifold joy I felt in a historic week.

As I journey through the humid confluence city of rivers and cultures of people, I will reflect on my days in Lokoja, on memories that help form a wholesome picture of the history that lies within the belly of that fast-growing city. Lokoja served as a route for me to Northern Nigeria during my National Youth Service year, fresh out of the university. I have always known the people of the city to be receptive and hospitable. I remember the joints where we used to sit to enjoy plates of hot and delicious fresh fish. As I returned to those joints, in front of Lugard’s resting house, to enjoy the grilled fish, Lokoja holds so many memories – of linkages and connections, through the pages and layered thoughts of history.

On this note, I greet you all and I pay homage to our collective history, and I say loud and clear, “Thank you very much!”

Share
Previous I Acted Badly, Forgive Me – Annie Ibibia Apologies To Tubaba
Next How my childhood influence my love for Afrobeat -Mide SF