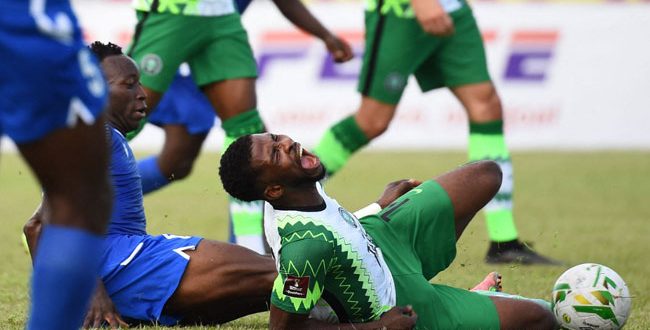 Karl Namnganda, who plays in the French fourth division, scored in the 90th minute to give the Central African Republic a stunning 1-0 away win over Nigeria on Thursday in World Cup qualifying.

The goal by the 25-year-old unknown from the Vendee les Herbiers Football club came against opponents boasting globally-known forwards like Victor Osimhen of Napoli and Kelechi Iheanacho of Leicester City.

Namnganda came off the bench in Lagos to make only his second appearance for his country after being substituted when he debuted against Liberia last month.

He silenced Nigerian supporters by winning a sprint down the middle of the pitch against two defenders and firing a low shot past goalkeeper Francis Uzoho.

“The boys do not understand how they lost this match. We dominated possession and had several opportunities to score but did not do so.”

Having drawn with Cape Verde and lost to Liberia in earlier qualifiers, a Central African Republic side coached by Swiss Raoul Savoy was given no chance of avoiding defeat in Nigeria.

But after snatching the lead, a team popularly known as the Wild Beasts survived eight minutes of added time to achieve a famous victory.

He refused to take part in qualifying for the 2022 finals in Qatar, citing poor management of players when he answered previous call-ups.

The Beasts changed coaches just before qualifying kicked off in September with Savoy put in charge a third time after Ivorian Francois Zahoui departed.

Rohr In Trouble?
The only crumb of comfort for the humiliated Super Eagles is that they remain top of Group C halfway through the second qualifying phase despite the loss.

Nigeria have six points, Cape Verde and the Central African Republic four each and Liberia three with only the section winners reaching play-offs next March, which will decide the five African qualifiers for the 2022 finals.

After hosting Cape Verde and Liberia in Cameroon because the national stadium in Bangui did not meet international standards, rushed improvements will permit the Beasts to play Nigeria at home.

The countries meet again on Sunday at the Stade Barthelemy Boganda, a 50,000-seat fortress where the Central African Republic seldom fail.

Losing in Lagos will inevitably lead to calls for Nigeria to sack German Rohr, a 68-year-old whose CV includes spells in charge of Gabon, Niger and Burkina Faso.

He was hired by Nigeria in 2016 and his recent contract renewal included demands that he win the 2021/2022 Africa Cup of Nations in Cameroon and qualify for the 2022 World Cup.

Cape Verde snatched a 2-1 away win over Liberia in the same section through a stoppage-time goal from Garry Rodrigues after teammate Jamiro Monteiro had equalised.

Benin boosted their chances of winning Group J with a 1-0 victory in Tanzania through a goal from Steve Mounie, who played for Huddersfield Town when they were in the Premier League during the last decade.

The Squirrels have seven points, two more than the Democratic Republic of Congo, who overcame Madagascar 2-0 in Kinshasa with 35-year-old Dieumerci Mbokani among the scorers for the third straight match.

Benin host Tanzania on Sunday and bottom team Madagascar next month while DR Congo are away to the same two countries before hosting the current leaders in the final round.

Mali crushed Kenya 5-0 with Ibrahima Kone scoring a hat-trick and Tunisia trounced Mauritania 3-0 to stay on course to win two of the other groups.