Tuface’s Brother Fires Back At Annie Idibia Over Alleged Infidelity

Charles Idibia, brother to  2face,  the award-winning musician, has slammed Annie Idibia, his wife over his social media rants.

Annie in a series of now-deleted posts on her Instagram stories, slammed her husband for allegedly spending the night with one of his baby mamas on the ground that he was visiting his kids.

In the posts, she spoke about the sacrifices she made in the marriage, adding that 2baba’s family never liked her from the outset.

But reacting via his Instagram page, Charles said Annie was ranting because she could no longer have her way like she used to do in the past.

Charles also alleged that her brother’s marriage to the movie star had made him unhappy that “he’s dying slowly”.

“You got married into a family of peace lovers, so peaceful that it is even a family flaw as I have come to realize. Perhaps, this has made you think we are fools but we are not,” he wrote.

“You are bringing up a Disney trip that happens pre-COVID because you somehow cannot totally have your way today like you used to?

“Trying to paint your husband bad publicly because he is a very private person. Is your threat tool means of gaining control? I thought you were smart abi the dealer gave you the wrong dose today?” 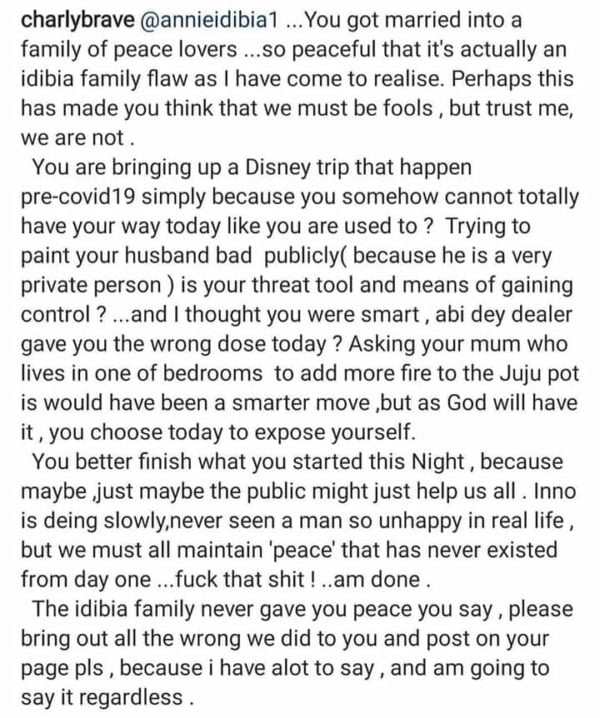 Charles alleged that Annie’s mother is using ‘juju’ for her just to sustain the marriage, while he also debunked the film star’s claim that his family never gave her peace.

“Asking your mum who lives in one of the rooms to add more fire to the juju pot would have been a smarter move but as God will have it, you chose today to expose yourself,” he added.

“You better finish what you started because maybe the public will help us all. Inno is dying slowly, never seen a man so unhappy in real life but we must all maintain peace that never existed from day one.

“The Idibia family never gave you peace? Please bring out all the wrongs and post them on your page. I have a lot to say and I will say it regardless.”

In a follow-up post, he also called Annie a “liar”, adding that “the truth won’t hide forever.” 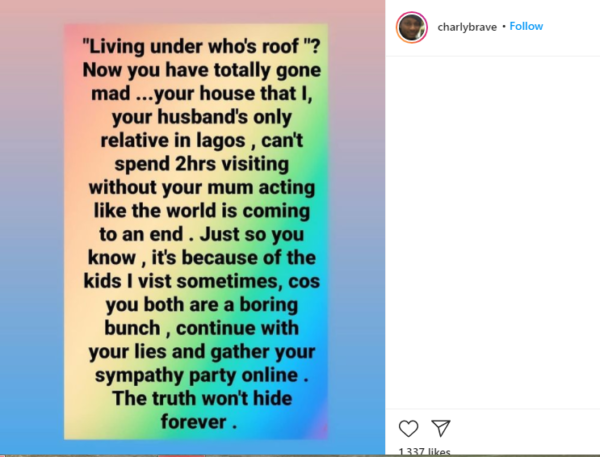 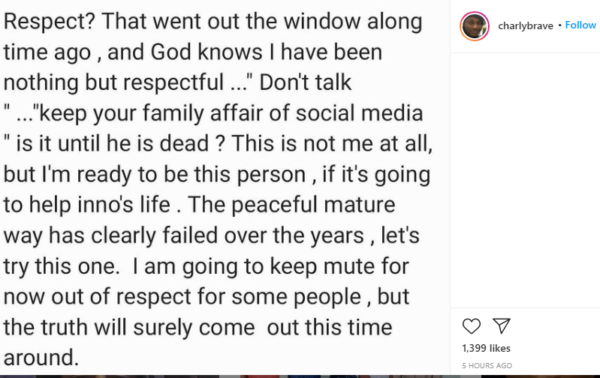 2Baba married Annie in May 2012. They both have two children, Olivia Idibia and Isabella Idibia.

He had previously been in a relationship with two other women named Sumbo Ajala-Adeoye and Pero Adeniyi.

The musician also fathered two children with Sumbo and three with Pero, making a dad to seven kids in total.

Share
Previous A CONVERSATION WITH OMOYELE SOWORE, PART 2
Next The fallacy of ethnic homogeneity