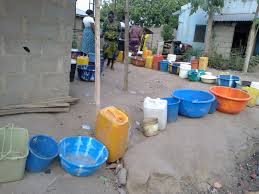 The Amalgamated Union of Public Corporations Civil Service Technical and Recreational Services Employees (AUPCTRE) and the Corporate Accountability and Public Participation Africa (CAPPA) have urged the National Assembly to reject attempts by the promoters of the stepped-down version of the National Water Bill to re-present it with the same contentious provisions in the hallowed chamber.

Both organisations took this position following a statement credited to President Muhammadu Buhari in the media last week calling on the National Assembly to quickly pass the contentious Bill.

President Buhari who spoke at a ceremony for the commissioning of the Zobe Regional Water Supply Scheme in Katsina State, was in the company of the Minister of Water Resources, Suleiman Hussein Adamu, who has been the arrowhead of the campaign for passage of the Bill.

The National Water Resources Bill was stepped down by the House of Representatives in September 2020 following findings by members of the House that its promoters did not follow the “right process”.

Before then AUPCTRE, CAPPA, and other groups across the federation and prominent personalities including Professor Wole Soyinka had written to the President asking him to recall the contentious document from the legislative quarters and kickstart a fresh process which will entail consultation with Nigerians from the initial stages through the entire process at the National Assembly.

In a joint statement issued in Lagos, AUPCTRE and CAPPA said the president’s remark is disturbing and at variance with what Nigerians from all works of life have asked for, including the need for a fresh process.

“We are shocked that the President is throwing his weight behind a Bill that would further fracture the unity among Nigerians and impugn on the rights of its citizens. Nigerians said it when the Bill was being debated, and Nigerians are saying it again: the National Water Bill is obnoxious, anti-people and unacceptable.”

Comrade Anthony urged the government to jettison the toxic bill and explore democratic decision-making processes in addressing water shortages in the country.

“It is unimaginable that even with the popular rejection of the anti-people Bill by a broad spectrum of Nigerians, the president is still bent on re-presenting it at the National Assembly. Nigerians are however resolute that a Bill which does not have their input and consent will not be foisted on them.”

Oluwafemi said that the acceptance of the privatisation myth, especially the Public Private Partnership (PPP) by the federal and state governments is the cog in the wheel of sustained public investment in the water sector. He was quick to caution that the privatization bent of government will only deprive communities of their right to a basic human right.

Oluwafemi added that the President’s remarks supporting the Bill reflects an unacceptable disregard for the wishes of Nigerians and the acceptance of the privatisation myth, especially the Public Private Partnership (PPP) which will ultimately lead to rate hikes, job losses and poor quality service as examples across the globe have shown.

The groups said that the way forward is for the government to discard the obnoxious National Water Bill and kickstart a fresh community-based process which will entail consultation with Nigerians from the initial stages through the entire process at the National Assembly.

They also urged the Federal Ministry of Water Resources to respect the genuine wishes of Nigerians expressed through the media and other public channels and stop its promotion of the toxic National Water Bill.