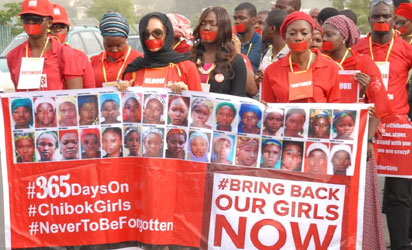 The Bring Back Our Girls(BBOG) movement says it is launching  ‘Until All Are Free’ campaign for the release of the remaining Chibok school girls.

The girls who were preparing for the final year examination where attacked in the middle of the night by the terrorist and taken away in buses.

This incident led to a global outcry including from support from  Michelle Obama, former First Lady of the United States  who called on the federal government to secure the release of the girls. The development led to the birth of #BringBackOurGirls movement.

After several efforts, the federal government announced that they have rescued 103 of the girls.  Seven years after,   the rest of the schoolgirls are still missing and unaccounted for.

In a statement issued on Tuesday, the group  said it is launching the campaign to get the remaining girls out of captivity.

“We, the parents, relations and supporters of the 112 of our Chibok Girls who remain unaccounted for are disturbed, disconcerted and distressed to know that for seven years, our cries have fallen on deaf ears; for seven years, the children of the rich and elite have grown in opulence and happiness while our beloved young women remain in captivity, forced into lives of unimaginable cruelty and privation,

“Even as we observe that other atrocities against Nigerian schoolchildren and students assault the sensibilities of Nigerians, and those children are returned to their families; the fate of our missing 112 Chibok Girls and the continuing trauma of Chibok parents and their communities are slipping from public consciousness and are no longer a priority for the Federal Government of Nigeria.

“On April 14th, 2021, we will be holding a series of actions to mark the seven year anniversary of the abduction in Lagos, Abuja, New York and Chibok. In these events, we will highlight the voices of the Chibok families whose lives have been shattered for seven years, as they face the devastating reality of their government’s neglect.

“We remind President Muhammadu Buhari of the statement he made at his inauguration in 2015: ‘We cannot claim to have defeated Boko Haram without rescuing the Chibok girls and all other innocent persons held hostage by insurgents.’

“But the actions – or rather, the inaction – of the Federal Government over our daughters in repeatedly claiming that the terrorists have been defeated even though our girls remain in bondage, is a painful reminder that this administration does not value the lives of our precious girls. They have been abandoned by the government that is supposed to protect them and promised to do so.”