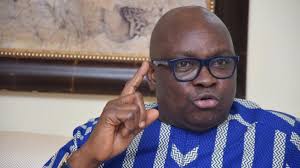 Ekiti State Governor Ayodele Fayose has said the conduct of Osun State governorship election, which he described as show of shame, is an indication that democracy is dead in Nigeria.

Fayose, who praised the People’s Democratic Party, PDP, governorship candidate, Senator Ademola Adeleke, for “a good fight”, consoled him,  saying: “You did not lose but your mandate has only been stolen”.

All Progressives Congress (APC) candidate, Alhaji Gboyega Isiaka Oyetola, was declared winner of the election which went into a second ballot.

The governor, in a statement issued on Friday by Mr. Idowu Adelusi, his Chief Press Secretary, rubbished the governorship election and its outcome.

He said: “With the show of shame that happened in last Saturday’s Osun State governorship election in general and the Thursday rerun in particular, there is no other conclusion to draw than that democracy is now dead in our beloved country and we are in critical times.

“The Osun supplementary election was just a repeat of what happened in Ekiti State on July 14th. And it is unfortunate that, again, the will of the people has been perverted.

“It was obvious even to the blind that the Osun election, as was the case with Ekiti, was a contest between the PDP and the security agencies supervised by a compromised INEC,” he stated.

According to him, the university professors also used as returning officers by the Independent National Electoral Commission (INEC) have, ab initio, been compromised and only serve the interest of those he described as their pay masters.

“Therefore, we want to believe that conscionable Nigerians and the survival of this country as a whole are at the mercy of God and of the judiciary. And if the judiciary fails to rise up to the occasion, Nigerians will be among men the most miserable.”

He condemned the violence that attended the Osun re-run election, sympathised with the families of those killed and enjoined PDP members to refrain from taking the law into their own hands as he assured Nigerians that “help will come soon”.