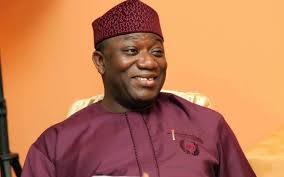 May 16, 2018 Comments Off on I’ll Resign From Buhari’s Government Next week, says Fayemi 24 Views

Kayode Fayemi, minister of mines and steel development  says he will resign his appointment next week.

Fayemi emerged as the candidate of the All Progressives Congress (APC) in the July 14 governorship election in Ekiti state.

The cable reports that Fayemi disclosed this to state house correspondents on Wednesday.

He said he is on a rescue mission to Ekiti, adding that he crossed a “critical hurdle” to emerge flag bearer of the APC in the election.

He said there is a lot of work to do and he and his co-contestants are seeing the coming election as a collective rescue mission.