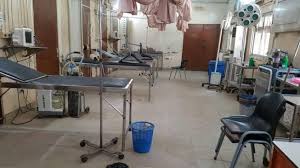 Fielding questions from journalists in Abuja on Monday, Biobebelemoye Josiah, JOHESU national chairman, also said the ministry of health is collaborating with the doctors to suppress the union’s demands.

JOHESU on April 17 embarked on an industrial action to press home its demands bordering on improved healthcare facilities and welfare, most prominent among them being to have equal pay with their counterparts in the NMA.

Already, the doctors have threatened to go on strike if the federal government accedes to some of JOHESU’s demands on the ground that it violates its earlier agreement with the government.

On Wednesday, Isaac Adewole, health minister, said negotiations were ongoing with JOHESU to end the strike.

But Josiah alleged that the ministers involved in the talks “were not serious” in ending the strike, accusing them of being in support of the doctors’ demands at the detriment of JOHESU.

He said: “This very agreement was entered into and then a memo was made to Mr President as they claimed even though they gave us a copy later.

“When they made this memo it was in December and the ministry of health defended her budget in February, but did not deem it to include that the amount it worked for the payment or settlement of this very issue.

“This goes a long way to show that there was dishonesty, insincerity from the beginning on the part of the (health) ministry because most probably the minister is a doctor; minister of state is a doctor and minister of labour who is supposed to be the chief negotiator, is also a medical doctor.’’

TheCable recently reported that the four-week-old strike has crippled healthcare delivery in public health institutions across the country.