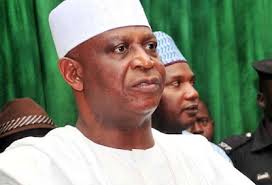 Former leaders of the PDP who defected to the APC in 2013 have written to the national chairman of the ruling party to demand an urgent meeting with President Muhammadu Buhari “within seven days”, TheCable can report.

They did not state their next line of action, although TheCable understands that they may pull out of the party which is already bedevilled by crisis following rancorous congresses nationwide last weekend.

The bloc, known then as the new PDP (nPDP), helped in dislodging the PDP from its 16-year rule in the 2015 general election.

They teamed up with the Congress for Progressive Change (CPC), Action Congress of Nigeria (ACN), All Nigeria Peoples Party (ANPP) and a faction of the All Progressives Grand Alliance (APGA), to form APC.

However, in a letter signed by Abubakar Kawu Baraje, former national chairman of nPDP and Olagunsoye Oyinlola, its former national secretary, and presented to John Odigie-Oyegun on Wednesday afternoon, the group listed several grievances and demanded an emergency meeting.

They complained that despite the role they played in bringing APC to power in 2015, they have been neglected in the scheme of things by the administration.

Some of the grievances listed by nPDP are:

No member was appointed into the federal executive council, expect one who did not deliver his state in 2015 (an obvious reference to Rotimi Amaechi, former governor of Rivers and minister of transportation)
No “significant patronage” and appointments to executive positions in various government agencies
When members showed interest in running for the offices of senate president and speaker, they were opposed by the APC hierarchy.
TheCable could not confirm when the seven days would start counting but the letter was dated May 7, 2018 — a day before Buhari travelled to the UK for medicals.

It is also not clear if his absence would affect the treatment of the letter.

The president is expected back in the country at the weekend.

TEXT OF THE LETTER
The National Chairman

We the members of the All Progressives Congress (APC), who moved over from the People’s Democratic Party (PDP) to form the APC before the 2015 General Elections in Nigeria are desirous of strengthening our party especially now that new party Congresses have commenced and the Convention and another round of General Elections are imminent. Obviously, this cannot be achieved without addressing fundamental issues which we wish to raise in this letter.

We therefore wish, with due respect, to re-state our expectation then and now that the APC we all laboured to build would be one united, inclusive, cohesive and progressive party devoid of divisions, factions, cleavages and tendencies. We envisioned a political party promoting equal rights for all Nigerians and ensuring rapid and even development across the country. Of course there is no gainsaying the fact that the lofty ideals enumerated above cannot be attained without ensuring justice for party faithfuls and citizens.

2. Kindly indulge us to offer a brief reminder of the history of events that led to the victory of the APC in the 2015 General Elections and the presidential election in particular. It is an undeniable historical fact that the movement of the former New PDP block to form the APC contributed immensely to the victory of the APC in the elections. The former new PDP included five sitting Governors of Sokoto, Kano, Kwara, Adamawa and Rivers States and former Governors of Kebbi, Gombe, Osun, former Vice President of Nigeria, former acting National Chairman of PDP, sitting Speaker of the House of Representatives, many serving members of the National Assembly and many renowned politicians and PDP Elders. It was a watershed moment in Nigeria’s political History.

3. Most of these leaders not only DELIVERED their States to the APC at the elections, some of the Governors were also assigned specific responsibilities to ensure that other States were also delivered to the APC in the 2015 elections. The then Governor of Sokoto took charge of Kebbi and the then Governor of Kano State took responsibility for Kano, Kaduna and Jigawa States just to mention a few examples. There were also unprecedented efforts by many stakeholders such as Senator Bukola Saraki, in concert with others, to DELIVER the entire North Central to the APC.

4. These efforts, contributions and sacrifice were made in spite of the fact that the presidential ticket was taken by the erstwhile Congress for Progressive Change, (CPC) and the Action Congress of Nigeria, (ACN) blocks of the party. It is a matter for grave concern that His Excellency, Mr President, Muhammadu Buhari, GCFR, has never publicly acknowledged our efforts in the face of clear evidence that the total number of votes scored by the APC in States where leaders and members of the then NEW PDP block held sway made the difference.

6. At this stage we would chronicle a few grievances which if addressed will lead to a harmonious APC where justice, equity, fairness and peace will reign and enable APC avoid rancour, reinvigorate the pace of national development and face the 2019 General Elections as one united party.

(a) In the constitution of the Federal Executive Council, (FEC) the New PDP block was generally sidelined as virtually no position was conceded to it. The only member of FEC that belonged to former New PDP block comes from a State that contributed virtually no vote to the APC in the 2015 presidential elections.

(b) There has been no significant patronage and appointments to executive positions in various government agencies such as Chief Executives and Executive Directors of government agencies and parastatals as members of our block of the party continue to helplessly watch as these positions are shared by the erstwhile CPC, ACN, ANPP and even APGA blocks of the party and those who have no party at all.

(c) In appointments into boards of various government agencies, very few former New PDP members were patronised. These are however not commensurate with our contributions to the growth and victory of the party.

(d) When members of the former New PDP block showed interest in running for the offices of President of the Senate and Speaker of the House of Representatives, they were subjected to a vicious and relentless political opposition as if they were not legitimate members of the APC family.

(e) During the party primaries preparatory to the 2015 General Elections, most of the promises made to sitting members of the National Assembly, who belonged to the former new PDP in terms of a level playing field were reneged upon or observed more in breach.

(f) There has been general lack of consultation, non recognition and even persecution of former New PDP members and leaders by the party and government. For example, some of our leaders are denied the security cover necessary to visit their constituencies even though they are elected representatives of the people in a government they sacrificed so much for.

(g) Harassment, intimidation and persecution of former New PDP leaders by the government, is still an ongoing affair. We do not want to overstate the obvious by cataloguing names of former new PDP stalwarts that are targets of this political pogrom.

(h) There is inadequate reflection of programme and policy contributions of members of the former New PDP block in the running of the government.

8. Our belief is that it does not augur well for our party if a section of it feels that it is being treated as outcasts and meddlesome interlopers in the party they rightly belong with the legitimate expectation to be treated with justice both in the running of the party and the government.

9. Arising from the issues outlined above, among others, we request for an urgent meeting with the Leader of the party, and the Party Executive leadership to find lasting solutions to the issues raised so as to prepare the party as a fighting force to deliver more pungently on its manifesto and face the 2019 General Elections with even greater commitment. The meeting will also enable us to work out modalities to ensure a level playing field for all in the Congresses and Convention of the APC.

10. Given the constraining factor of available time and in the interest of our great Party, it is strongly advised that the said urgent meeting be held not later than Seven (7) days from the date of the receipt of this letter.

11. In conclusion, we the members of the former New PDP block of the APC wish to reiterate that this letter is written patriotically with the best of intentions and the good of our party, the APC, and is issued to alert the leadership of the APC and in particular, the leader of our party, President Muhammadu Buhari, GCFR, who only recently indicated his intention to seek a second term as President, of grievances that exist within the party with a view to ensuring justice for all members of the APC family regardless of the blocks they came from prior to the formation of the APC.

For and on behalf of the former New PDP Block of APC: