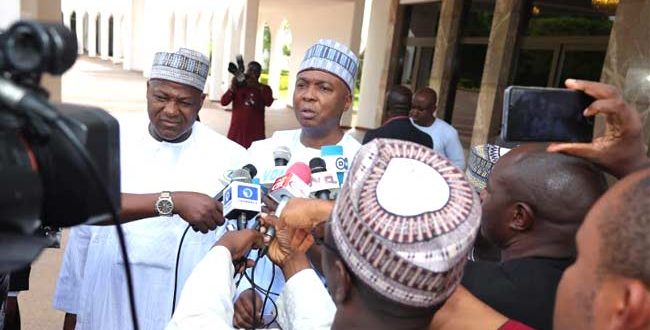 The Senate President, Bukola Saraki, has said that the National Assembly will ensure that the 2018 budget will be passed next week.

Dr Saraki disclosed this to newsmen after a closed-door meeting with President Muhammadu Buhari and the Speaker of the House of Representatives, Yakubu Dogara.

The meeting was held at the Presidential Villa in Abuja, the nation’s capital.

Similarly, the House of Representatives had last week said it will pass the 2018 budget before the end of next week.

The House Committee Chairman on Media and Public Affairs made the statement while briefing journalists at the end of Thursday’s plenary.

According to him, the budget will be laid before the house on Tuesday next week.

The House had earlier in April promised to pass the budget before the end of the month of April.

He further stated that the 3-day suspension of sitting in solidarity with Nigerians regarding the killings across the country will be communicated after the budget is passed.

Share
Previous Breaking: Buhari To Travel To UK To See His Doctor
Next I Was The First To Make $1m Off The ‘Pon Pon’ Sound, Says Davido