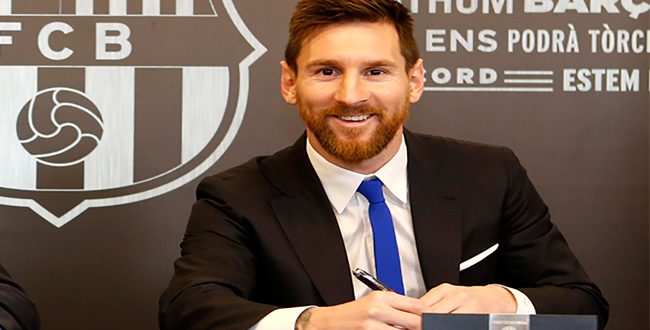 Barcelona footballer Lionel Messi won a legal battle Thursday to register his name as a trademark to sell sports goods after an EU court ruled that he is too famous to be confused with other businesses.

The Argentine star, the world’s highest-earning footballer, rode out a challenge by a Spanish cycling gear manufacturer called Massi, which had challenged his trademark on the grounds that it was too similar to its own.

“Lionel Messi may register his trademark ‘MESSI’ for sports equipment and clothing,” said a ruling by the General Court of the European Union, the bloc’s second-highest court.

“The football player’s fame counteracts the visual and phonetic similarities between his trademark and the trademark ‘MASSI’ belonging to a Spanish company,” the Luxembourg-based court said.

The ruling caps a seven-year legal fight since the footballer first tried in 2011 to trademark his name with the EU’s intellectual property office.

The boss of the Massi cycling goods company filed an appeal the same year, saying there was a “likelihood of confusion” with its own trademark, and the trademark office agreed.

Judges admitted that the trademarks “are very similar phonetically” but said the IPO was wrong to assume that Messi was only known by people who were interested in football or sport.

“Mr Messi is, in fact, a well-known public figure who can be seen on television and who is regularly discussed on television or on the radio,” the court said.

The ruling comes days after it emerged that Messi has overtaken Cristiano Ronaldo as the highest earner in world football, according to France Football magazine.

The Barcelona attacker is making 126 million euros ($154mn) in salary, bonuses and commercial revenue for the current season while his great Real Madrid rival is making 94mn euros.