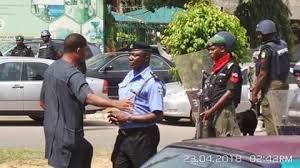 Police in the Federal Capital Territory (FCT) has again clashed with protesters of El-Zakzaky Islamic Movement in Nigeria (IMN) also known as Shiites.

The protesters during the clash with the security agents threw stones and other objects, thereby causing damage to cars and buildings in the area.

The police agents in return teargassed the protesters in order to disperse them and prevent their convergence on a spot in the Maitama area of Abuja.

The police, in order to prevent the protesters, cordoned off part of the road between Eagle Square and Unity Fountain in Abuja.

Several of the protesters were arrested in the process.

The Islamic movement has been agitating for the release of their leader, Sheik Ibrahim El-Zakzaky, who has been in detention since December 2016.

Today’s protest is coming less than a week after the Shiite protesters and police clashed in Wuse area of Abuja.

Police officers had dispersed the protesters with water cannons and tear gas after they assembled at Wuse and were processing towards the Berger junction area.

Police authorities later explained that 115 members of the El-Zakzaky Islamic Movement in Nigeria (IMN) were arrested after the protest for attacking innocent citizens, disrupting business activities, obstructing traffic movement and smashing the windscreen of innocent citizens’ vehicles in the affected areas.

Share
Previous There’s A Plan To Kill Me, Says Melaye
Next Salah To Make History At Liverpool – Henderson