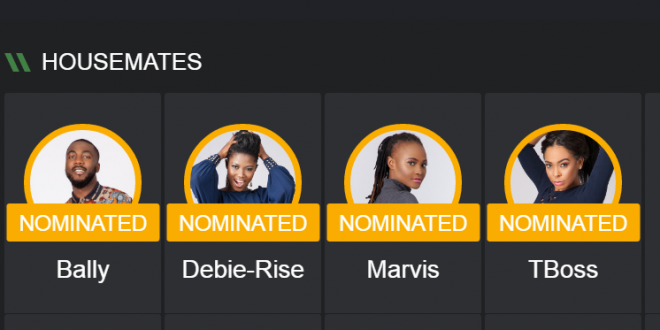 Four Housemates, TBoss, Debie-Rise, Marvis and Bally have been nominated for eviction from the Big Brother Naija reality show.

The quartet was Monday evening given the yellow card, with one or two of them expected to leave the house during Sunday’s live eviction show.

Bisola, the new head of house, was the only housemate spared from being nominated for eviction.

How the seven housemates voted

After the nominations in the diary room, Efe, Marvis, TBoss and Debie-Rise were announced as being up for eviction.

But a twist soon came into play.

Bisola, who is head of house for the first time, was given the privilege to save a housemate.

She chose to save Efe and put Bally up for eviction.

Bally, who was apparently  upset over Bisola’s decision, said he is “being strong” about the situation.