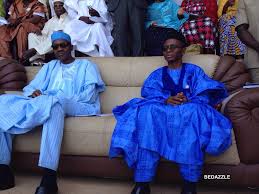 El-Rufai To Buhari: People Around You Lack Experience

March 17, 2017 Comments Off on El-Rufai To Buhari: People Around You Lack Experience 7 Views

Governor of Kaduna state, Nasir el-Rufai, has written a strongly-worded letter to President Muhammadu Buhari, highlighting what he considers are the factors compounding the challenges of the current administration.

In the letter, which was published by Sahara Reporters, el-Rufai alleged that some of the people around the president lack experience.

He said there is a possibility that some officials in the presidency have persuaded Buhari that governors of the All Progressives Congress (APC) “must have no say and must also be totally excluded from political consultations, key appointments and decision-making at the federal level”.

The governor said through failing to be proactive in taking key decisions in a timely manner, the ruling party has made the situation in Nigeria worse than it met it.

According to Sahara Reporters, the memo which was sent to Buhari in September, was a follow-up to an earlier one sent by el-Rufai.

“In very blunt terms, Mr President, our APC administration has not only failed to manage expectations of a populace that expected overnight ‘change’ but has failed to deliver even mundane matters of governance outside of our successes in fighting BH insurgency and corruption,” el-Rufai said in the 30-page memo.

“This situation is compounded by the fact that some officials around you seem to believe and may have persuaded you that current APC state governors must have no say and must also be totally excluded from political consultations, key appointments and decision-making at the federal level.

“These politically-naive ‘advisers’ fail to realise that it is the current and former state governors that may, as members of NEC of the APC, serve as an alternative locus of power to check the excesses of the currently lopsided and perhaps ambivalent NWC.

“Overall, the feeling even among our supporters today is that the APC government is not doing well. I am distressed that our government is seen not to be succeeding mostly due to the failures, lack of focus and selfishness of some you have entrusted to carry on and implement your vision. I am troubled that our own missteps have made the PDP and its apparatchiks so audacious and confident.”

Advising the president that it is not too late to reverse the situation, El-Rufai said the secretary to the government of the federation and the chief of staff do not have experience in public service, lack humility, “in addition to being insensitive and rude to virtually most of the party leaders, ministers and governors”

“The two officials whose titles may enable them function as such generally alienate those that contributed to our success,” he said.

“The chief of staff is totally clueless about the APC and its internal politics at best as he was neither part of its formation nor a participant in the primaries, campaign, and elections.

“In summary, neither of them has the personality, experience, and the reach to manage your politics nationally or even regionally.”

He called on the president to “act decisively,” and expressed the hope that his memo will “contribute in some way in regaining our governance momentum.”

“You have both a crisis and opportunity in your hands to turn around our country in the right direction. We pray that Allah gives you the strength and good fortune to succeed,” he said.

“This is an honest, frank and objective view of an admirer, a mentee, and a loyalist. I hope it helps, and I apologize if it displeases you. My duty to you is to tell you the truth as I see it. I have no interest other than the progress of our party, our president, our government, and our country.”

El-Rufai also expressed belief in Buhari, recalling how the president convinced him to return to power.

“I ran for state governor because you directed me to do so,” he said.

“From 2010 when we joined your team, I have no other interest other than your place in history as our president. I believe in your integrity, commitment and sense of duty to make our nation better.

“Mr President, it is also clear to many of us that have studied your political career, that so long as you remain in the political landscape, no northerner will emerge successfully on the national scene. All those wasting time, money and other resources to run in 2019 either do not realise this divinely-ordained situation or are merely destined to keep others employed and rich from electoral project doomed to certain failure.”

He also advised Buhari to consider communicating actively and directly with the Nigerian public about his vision – the government’s plans, strategy, and roadmap to take the country out of the current, dire economic situation, suggesting a five-year national development strategy and plan urgently.

“The president should speak to the nation – something akin to a state of the union address on December 1 or January 1,” he said.

In an interview with the BBC last year, Aisha Buhari, wife of the president, made reference to some of the issues raised by el-Rufai.

Buhari had waved her comment aside, saying she belongs in his “kitchen and the other room”.