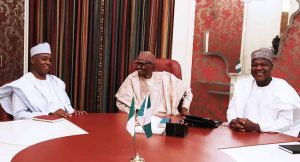 President Muhammadu Buhari, has held a closed door meeting with the leadership of the National Assembly at the Presidential Villa.

The Senate President, Dr. Bukola Saraki and the Speaker of the House of Representatives, Yakubu Dogara, were at the President’s office for about 40 minutes.

Dr. Saraki who was first to speak to journalists after the meeting, said it was a normal consultation designed to brief the President on some of the issues that happened in his absence.

He said that the National Assembly is happy to have the President back in office, doing his work very well, adding that all issues pending such as the budget will be given expeditious passage.

Meanwhile, Mr Dogara, said that they will ensure that there is cooperation between the executive and the legislature for the interest of Nigerians.

This is their first meeting with the President since he returned to the country, after a 49-day vacation in the United Kingdom.

The President on Monday resumed duties at his office and sent a letter of resumption to the National Assembly and House of Representatives.

The Special Adviser to the President on Media and Publicity, Femi Adesina, revealed in a statement that: “In compliance with Section 145 of the 1999 Constitution (as amended), the President has formally transmitted letters to the Senate and the House of Representatives, intimating the National Assembly of his resumption.

Share
Previous Court Says You Should No Longer Take Fanta, Sprite With Vitamin C
Next How EFCC Impounds N49m At Kaduna Airport