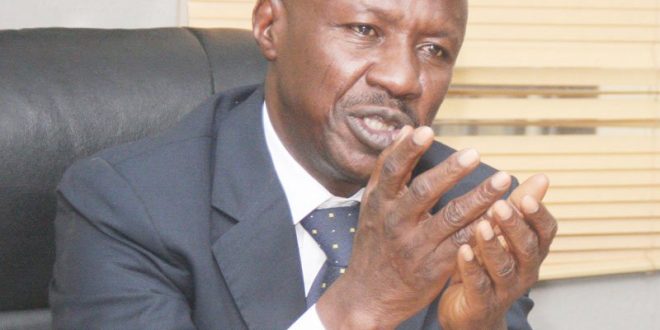 The federal government has denied making a fresh presentation to the Senate for the confirmation of Acting Chairman Eof Economic and Financial Crimes Commission (EFCC), Mr Ibrahim Magu.

The Presidency said on Monday that President Muhammadu Buhari has not written a fresh letter to the Senate insisting on confirming Magu.

The Special Assistant to the President on National Assembly Matters (Senate), Mr Ita Enang, told the News Agency of Nigeria (NAN), said he was not aware of such letter.

Enang was reacting to media reports that the President, who is currently on a 10-day annual vacation, had sent a letter to the Senate insisting on the confirmation of Magu.

“You are about the third person calling me on this matter.

“I am not aware of that discussion and I don’t want to speak on the matter because I don’t have details,’’ he said.

Senate on Dec. 15, 2016, rejected the request for the confirmation of Magu based on security reports from the Department of State Security (DSS).

It thereafter returned the nomination Magu to the President for further action.

The presidency had in July 2016 written the Senate, requesting the screening and confirmation of Magu as Substantive Chairman of EFCC.

Buhari appointed Magu as acting chairman of the EFCC after the removal of Mr Ibrahim Lamorde on Nov. 9, 2015.

Before his appointment as the acting EFCC chairman, Magu was the Head of Economic Governance Unit of the commission. (NAN)