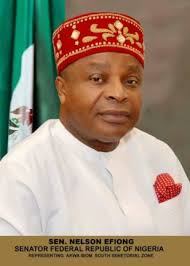 January 19, 2017 Comments Off on Senator Nelson Effiong of PDP decamped to APC 42 Views

Senator Nelson Effiong of PDP representing Akwa-Ibom South Senatorial District has decamped to the All Progressive Congress , APC. Mr Effiong was elected as A senator under the platform of People Democratic party PDP.

Mr. Effiong who was  a former speaker of the Akwa Ibom State House of Assembly before elected as a senator, He is also from the same senatorial district as the governor of the state, Udom Emmanuel.