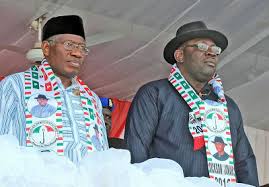 Governor of Bayelsa state, Seriake Dickson, has expressed dissatisfaction with the way the current administration is treating former President Goodluck Jonathan, whom he described as his “elder brother”.

According to LEADERSHIP, Dickson said this when he received some journalists in Yenagoa, the state capital.

Commenting on the recent invasion of the house of the former first family in Abuja, Dickson advised security agencies to tread softly and treat Jonathan with the decorum and the respect he deserves.

He said the treatment being meted out to Jonathan’s family is sending the wrong signal about the anti-corruption war of the government of President Muhammadu Buhari.

“President Jonathan is from my state and no doubt an elder brother. Someone we regard as a leader and former president of our country deserves every respect and to be given a fair treatment even as the private citizen that he has now become,” he said.

“Talking generally now, not just about President Jonathan and his family, I feel that the perception that some of the policies of the present government are selective or are targeted at some persons or some sections is inimical to a number of reforms that the federal government is pursuing and that is not helpful; that perception should be addressed.

“It may just be a perception and probably it is not real but perceptions are also as important as realities. That should be addressed. Like every leader, he and his family should be treated with decorum and respect that he rightly deserves. Let us see how things play out, there should be less sensationalism.”

Recalling the unfolding events in Gambia, Dickson said with time, Nigerians will appreciate the kind of sacrifice made by Jonathan.

While Jonathan did not wait for the result of the 2015 election to be announced before congratulating Buhari, President Yahya Jammeh of Gambia, hailed Adama Barrow, his opponent, for his victory but later recanted, alleging that the election was fraught with irregularities.

West African leaders are still trying to talk Jammeh into stepping down in order to avoid a crisis.

Dickson said Jonathan did not use power in a crude manner.

“This country, with time, will appreciate the kind of sacrifice and service that Jonathan’s presidency gave,” he said.

“Jonathan as a person tried his best and particularly in the area of the use of power and authority. He never used his public authority to harm anybody and the democratic process.

“You can see what is happening in Gambia now. Gambia is in crisis and for some of us when with time our memoirs come out, people will know some of the difficult decisions that people had to take in the national interest.”