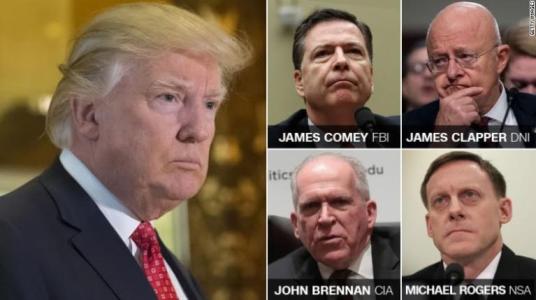 A two-page summary of the unsubstantiated allegations was presented to Trump and President Obama last week in meetings with the CIA, FBI, National Security Agency and director of national intelligence, CNN reported Tuesday.

A longer document that the summary was allegedly based on was published in full by BuzzFeed News on Tuesday. It said that during a 2013 trip to the Russian capital, Trump made Russian prostitutes defile a Ritz-Carlton bed where President Obama and First Lady Michelle Obama had stayed on a previous occasion. 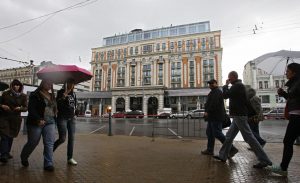 It said the incident was captured on surveillance cameras.

The accusations in the BuzzFeed documents are unconfirmed, though Trump did travel to Russia in 2013 when he hosted the Miss Universe pageant there. The Obamas traveled to Moscow in July 2009.

The Daily News could not verify the information, allegedly provided by Russian sources.

“FAKE NEWS — A TOTAL POLITICAL WITCH HUNT!” Trump posted on Twitter Tuesday evening. He and Vice President-elect Mike Pence both later tweeted a link to a story criticizing BuzzFeed for publishing the documents.

But Trump adviser Kellyanne Conway contradicted the claim that the President-elect had been briefed on the unsubstantiated report.

“He has said he is not aware of that,” Conway said during an appearance on NBC’s “Late Night With Seth Meyers.” “I actually have to say as an American citizen, regardless of your party . . . we should be concerned that intelligence officials leaked to the press and won’t go and tell the President-elect.”

CNN reported the memos were compiled by a former British spy trusted by American intelligence who was stationed in Russia in the 1990s but now runs a private intelligence company that does opposition research.

He told Mother Jones in late October that his work “started off as a fairly general inquiry” but that he began sending information to a contact at the FBI in July after he realized it was “sufficiently serious.”

The 35-page report published by BuzzFeed claimed Trump participated in sex parties in St. Petersburg where witnesses were bribed to be silent.

The report says Russian officials, with the approval of President Vladimir Putin, have been “cultivating” Trump for five years, and that he received intelligence information on political opponents from them.

Those on Trump’s team who allegedly were coordinating contact with Russia included Paul Manafort, who formerly advised the ousted pro-Kremlin president of Ukraine, lawyer Michael Cohen and adviser Carter Page, a financier who has invested in state-owned gas giant Gazprom, the documents say.

Cohen, who is alleged to have had a meeting in the Czech Republic with Kremlin officials, posted a picture of his passport on Tuesday night and said, “I have never been to Prague in my life. #fakenews.”

Cohen told the Atlantic, “The story is completely inaccurate, it is fake news meant to malign Mr. Trump.”

Yahoo News had previously reported that U.S. intelligence was investigating a meeting between Page and Igor Sechin, the head of Russian oil company Rosneft.

Tuesday’s allegations include that Page implied that a President Trump would lift sanctions on Russia imposed by the Obama administration as relations weakened during the crisis in Ukraine and Crimea.

BuzzFeed said in a statement that it released the documents “so that Americans can make up their own minds about allegations about the President-elect that have circulated at the highest levels of the U.S. government.”

“The document is not just unconfirmed: It includes some clear errors,” the statement said, citing a misspelling of the name of Russian investment company Alfa Group.

Trump was told in the intelligence briefing that Russia also had compromising financial information about him, a U.S. official told The Associated Press. The FBI applied for foreign intelligence surveillance warrants on four members of Trump’s team this summer, the Guardian reported, but was turned down and told to submit a more narrow request.

It is not clear whether the agency ever succeeded in receiving a warrant.

The unconfirmed bombshell about the Cold War adversary and Trump comes as FBI Director James Comey told senators during an intelligence committee hearing that hackers had breached Republican groups as well as Democratic ones.

He said that the information was “old stuff” and that there was no evidence that the Trump campaign or the Republican National Committee had been hacked.

Comey, testifying hours before the CNN report aired, refused to say whether his agency was investigating any possible ties between Trump’s campaign and Russia.

“I would never comment on investigations — whether we have one or not — in an open forum like this, so I can’t answer one way or another,” Comey told the committee.

“The irony of your making that statement, I cannot avoid,” said Sen. Angus King, a Maine independent, referring to Comey’s announcement in late October that the FBI was looking at more emails as part of its investigation of Hillary Clinton.

A report publicly released last week by the CIA, FBI and NSA said that the Russian government had orchestrated the leaking of information stolen from the Democrats to influence the election and “undermine public faith in the U.S. democratic process” and to help Trump’s chances on Nov. 8.

Trump has dismissed reports that the Russian government aided in his election victory, and members of his team have said that attention paid to the hacking stems from a “sore loser” mentality.

Russian officials have repeatedly denied having any role in ordering the hacks, and WikiLeaks founder Julian Assange has said that he is sure that the source was not the Russian government. 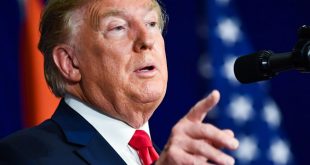