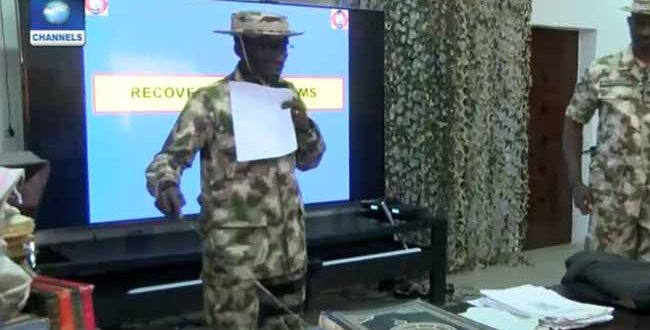 The Nigerian Army has lost two soldiers in another Boko Haram attack close to the Nigerian border with the Republic of Chad.

Theatre Commander of the Operation Lafiya Dole, Major General Lucky Irabor, told journalists on Wednesday in Maiduguri that mop up operations in the Sambia forest have continued.

The soldiers have also recorded uniforms used by key Boko Haram officers in production of some of the videos they send to the public.

Furthermore, General Irabor presented other materials recovered from the terrorists such as notebooks, which according him were used to take notes on how to make bombs and Improvised Explosive Devices (IEDs).

He then went ahead to present “two criminals”.

“I call them criminals because we are still going through the process and until they become repentant, they remain criminals.”

According to him, “the first one is an Amir, who had been interfacing across the borders, (Nigeria, Cameroon and Chad), running different errands for the Boko Haram Terrorists (BHT).”