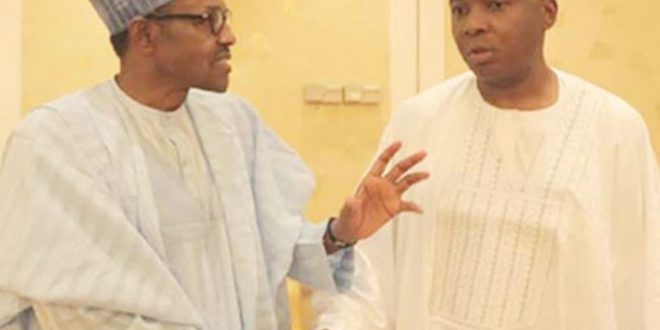 Also  on Friday the president assented to Endangered Species Control of International Trade and Traffic Amendment Act 2016, earlier passed by the National Assembly.

Following the signing of the Species bill, it now brings to 17 the total number of acts the president assented to in the year 2016.

Dr. Saraki, who arrived at  about noon, also joined the Buhari to observe the Jumat prayer at the Villa.

Speaking to Journalists on what Nigerians should expect in 2017 from the National Assembly, Saraki said attention will  be on passage of the 2017 budget and other issues concerning the economy.

“In 2017, our attention will be on the economy because that is really a major issue for us as a country. We want to see some of the economic bills passed, to see that there is greater improvement in the budget process in 2017 and to see that the government implements the budget early.

“Also, one of our pet projects is ‘made in Nigeria products.’ We want to see to it that government continues to support Nigerians in this area, so that the difficult times Nigerians are going through can ease. So, next year is very important to us and I think on the part of National Assembly, we will continue to give our support to ensure that the right things are done.”

On the fall of Sambisa forest, the Senate President said: “it is a great progress from where we were before. If you look at where we were a year and half ago, the challenge we had was for us to capture the place. I think is a great feat. It shows what we can do as a country when we have the commitment, purpose and the leadership required to do that. As we have done that in the North-east, I believe the other issue before us is the fight against corruption, the economy, providing jobs and peace in the Niger Delta.”

On the president signing 17 bills into law, the Senate President said: “it shows in part what we have been able to do in the National Assembly and there are many more bills to come. The President is also responding to them. You are going to see more of that in 2017. For us in the Senate, just in this last three months, we did much more than what we did in the entire year. The National Assembly is settling down and as such, you will see more bills passed to the President for signature.”

The Senior Special Assistant to the President on National Assembly Matters (Senate), Ita Enang, who also spoke with State House Correspondents, said the bill signed yesterday by Buhari, was one of the ten bills forwarded to him by the National Assembly.

Enang said the President had signed all the bills sent to him.

“The intent of this amendment is to bring the penalty provisions in line with the economic realities and to serve as a deterrent to people trafficking in endangered species because they are the preserves of the country.”

He added that with the assent, the President has increased the penalties for violations of the provisions in line with today’s realities.