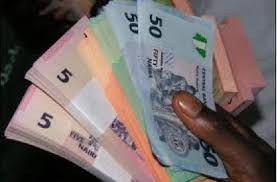 The Central Bank of Nigeria (CBN) has not printed the small naira denominations for about a year, causing the scarcity of the notes in the economy, NAN is reporting.

NAN quoted sources at the CBN as saying that for a year now, the apex bank did not award contract for the printing of the notes such as N5, N10, N20 and N50 usually done abroad.

It said it gathered that the recently printed notes in circulation — N200, N500 and N1,000 — were produced by the Nigeria Security Printing and Minting plc (NSPM).

NSPM produces currency notes and coins for the CBN and a wide range of security documents for the federal, state and local government establishments, commercial banks and blue chip companies.

According to the NSPM website, the company has the ability to print over 40 million notes weekly. However, the high cost of printing banknotes forced CBN to refrain from giving contracts for their production.

“The cost of printing N50 is almost the same as N1,000. Printing small denominations costs more than the value and with the present economic situation, it makes sense to print higher notes which can be done locally by NSPM.

A worker at the First Bank Plc, told NAN that throughout the 2016 festive seasons, there were hardly smaller currency notes to give to customers.

“We usually request for cash from the CBN through our Cash Management Centre, but recently we have not been able to get mints of N100 and below,” the worker, who also asked not to be named, said.

“We had N50 at one point but it wasn’t in the quantity we are used to getting. We have been telling our customers who call to request for mints that the smallest currencies they can get is N200.”

Jude Ndukwe, a political economist, said the implication of the situation was that prices of goods were likely to increase since there were no smaller currencies in circulation.

“A bread seller is likely to increase the cost of bread from N350 to N400 simply because he does not want to deal with the difficult task of getting change,” he said.

“The same goes to a bus conductor and so forth. This act alone is enough to add to the hardship of the average Nigerians.

“N10, N50 may not mean anything to some, but it means a whole lot to millions of Nigerians living in poverty. So the government should do something about this.”

But Isaac Okorafor, the CBN acting director, corporate communications, denied the allegation that the apex bank had not contracted the printing of smaller denomination currencies since 2015.

“You see, people are fond of abusing these denominations by spraying them to be stepped on during weddings and other ceremonies.

“The abuse is even worse during the festive season, so we decided to make scarce the denominations. But it’s not that we have not been printing them. Yes we haven’t printed abroad, but we also print locally, which we have been doing.”

When asked the last time Nigeria actually had these smaller denominations printed, he promised to get the details.

He reiterated that it is still a crime to hawk or sell mint notes in the country, saying there is still an enforcement committee, comprising CBN and the security agencies, to check the menace and arrest culprits.

Okorafor said that the CBN was collaborating with the police to ensure that the Nigerian currencies are not abused.