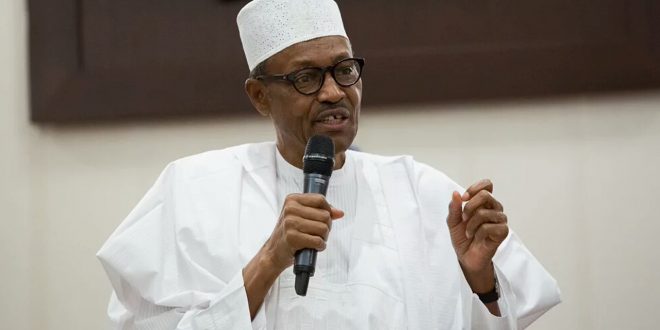 President Muhammed Buhari has urged the people of Niger Delta who are attacking nation’s oil assets to desist and come forward for talks with his government in the interest of the country.

Speaking when he received residents of the federal capital territory(FCT) Muhammed Bello, Buhari said the country ‘s citizenry are his uppermost priority.

“For our friends in the Niger Delta area, we will persuade them that they should please sit down with us and agree to manage our resources rather than think of fighting it out,” he stated.
“I want you to talk to people to be patient with the government. We are always thinking about our country and we are thinking about our people.
“God has given Nigerians a lot of resources, both human and material; we better do the right thing for our children and grandchildren.
“I assure you that the country and the people of the country are always uppermost in our minds. With our performance in the North East, Nigerians know that this government is serious,” Buhari said.
“I think it is good to select objectives and be honest about them and work towards them. It is now almost 18 months since we resumed here. We are very lucky. I believe some of you followed us during our campaigns and what we identified are still fundamental problems.
“The first is security, and we kept on saying, whether it is an organisation or a country, we have to first secure it before we can manage it properly. Without security, nothing can work.
“Secondly is the economy and the unemployment of able bodied persons. We look at the left and right, from 1999 to 2014, the crude production was over 2.2m barrels per day. The average cost per barrel was $100. When we came, it was $37. I think it is now between $40 and $50.
“I asked for savings; there was no saving. I asked what they used the money to buy; they said they bought food and oil. I do not know how long it took me to recover from the shock,” he said.
Buhari recalled that it was cocoa, palm kernel, cotton and the agro-allied industry that was used to build infrastructure in the country, including the rails and schools.
He lamented that the country used agricultural produce to develop oil but that when oil was discovered, the country threw everything away.
“We thank God that, this year, the harvest was quite good; otherwise, I do not know what we would have done – no money saved; no infrastructure built; power is still our main problem. Old roads have dilapidated and they need to be repaired from Lagos to Kano, Port Harcourt up to Maiduguri. There are rail lines we want to develop from Lagos to Calabar, from Lagos to Kaduna and the Abuja one.
“If we can get the infrastructure done, we cannot even know the number of Nigerians that will get jobs. So we have to get infrastructure. It will take tankers and other articulated vehicles off the road. We will save vehicles and we will save lives and we will get jobs for a lot of Nigerians,” the president said.
Also speaking, Jonah Samson, chairman of the Christian Association of Nigeria (CAN), FCT chapter, urged Buhari to continue his war against corruption.
“Corruption is a canker worm. It is a terrible thing that we must kill. We urge you to ensure that the war continues. It should not end during this administration,” Samson said.
“We thank God for the victory over Boko Haram. It is a thing of joy worthy of celebration.”