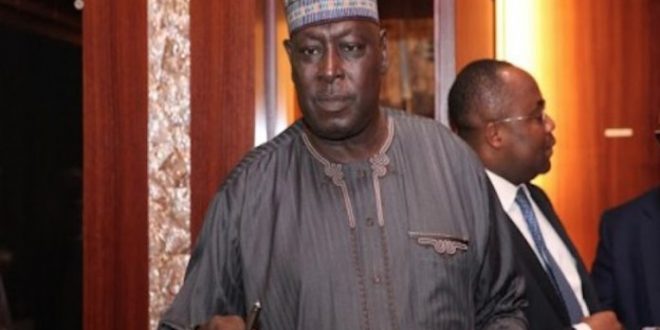 Presidency Alerts Senate of Cabinet Shake up Next Month

December 19, 2016 Comments Off on Presidency Alerts Senate of Cabinet Shake up Next Month 13 Views

• 10 ministers may be moved as Buhari quietly shops for Lawal’s replacement as SGF
The presidency has reached out to the Senate informing it of its intention to carry out a cabinet shake up that may affect no fewer than 10 ministers in the federal cabinet early next year, THISDAY learnt last night.
An impeccable source told THISDAY that the presidency had decided to give the Senate the heads up on the imminent sack of some ministers and their replacement with new nominees in the spirit of the recent rapprochement reached between the Senate leadership and the presidency.
The objective on the part of the presidency is to avert a volatile screening process.
THISDAY further learnt that other than the changes to the cabinet, it has become compelling for Buhari to fill the two existing vacancies created by the demise of Mr. James Ocholi, former Minister of
State for Labour and Productivity, in March this year and the imminent exit of the Minister of Environment, Mrs. Amina Mohammed, following her appointment as the Deputy Secretary-General of the United Nations (UN).
Ocholi, before his unfortunate demise in a car accident, represented Kogi State in the cabinet while Mrs. Mohammed represents Kaduna State.
A source close to the presidency, said the presidency was disturbed by the series of conflicts between it and the Senate in recent times, resulting in the rejection of various presidential requests.
THISDAY also learnt that some of the 10 ministers to be affected by the exercise would be dropped while others would swap portfolios.
It was also learnt that having worked with the ministers for 14 months, Buhari now has the opportunity to put things in order in his cabinet.
“There is an understanding that in the new year, one of the key
assignments the Senate will undertake, aside from the consideration of the 2017 budget, is the screening of new ministerial nominees who will be replacing some of the ministers that will soon be asked to leave
It was also learnt that the Buhari administration was prepared to effect changes, following the criticism that it had put round pegs in square holes. So he wants to ensure that come next year, ministers are rightly placed while those considered to be under-performing are shown the exit.
It was also learnt that the exercise would affect appointees from the various geopolitical zones, just as THISDAY learnt that both the presidency and the Senate had rubbed minds on the issue in their renewed resolve to work together in the interest of the nation.
The presidency was said to have opted to carry the Senate along in its subsequent plans because it was said to have been taken aback by some of the parliament’s recent decisions.
For instance, only last Thursday, the Senate rejected the acting Chairman of the Economic and Financial Crimes Commission (EFCC), Ibrahim Magu.
Earlier, it had rejected the president’s request for approval of a $30 billion external borrowing plan. It also returned the non-career ambassadorial list and dropped some nominees of National Communications Commission (NCC).
In addition, it returned the Medium Term Expenditure Framework (MTEF) before re-considering it stance.
A source told THISDAY in the Senate that despite the presidency’s search, the forthcoming screening of ministerial nominees would not be a walkover for anyone.
“The senate will set a high standard. Security reports will be taken seriously. There will be thorough screening. It will not be a tea party,” he added.