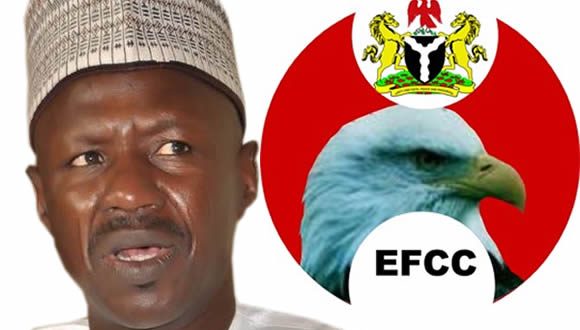 The Senate has said it may reconsider its refusal to confirm the appointment of the Acting Chairman of the Economic and Financial Crimes Commission, Ibrahim Magu, if President Muhammadu Buhari provides the necessary explanation for it to do so.

It said the explanations to be made by President Muhammadu Buhari, who had nominated Magu, would determine whether the nominee would be considered or not.

The lawmakers had on Thursday rejected Magu’s nomination by the President as the substantive chairman of the anti-graft agency based on a “security report” on him.

A security report by the Department of State Services, in which Magu was accused of various corruption-related offences, had caused the Senate to reject his nomination.

The Chairman, Senate Committee on Media and Public Affairs, Senator Sabi Abdullahi, on Friday told one of our correspondents that the lawmakers had taken their decision on the matter and it was left for Buhari to take the next step.

He said, “This is not an issue that is ambiguous and I will not take issue with anybody. What we have said is very straightforward and unambiguous. It is not our responsibility or in our power to tell Mr. President what to do.

“It is his prerogative and for every action taken, there must be a basis. Let him take any action but, of course, he will base his action on explanations. If that happens, we will take his explanations based on their face value and see. Until then, our decision is very simple. It is unambiguous; that is what we said from the beginning and that is what we stand by.”

Meanwhile, the Senate on Friday said the rejection of Magu would be communicated to the Presidency by next week.

The Chairman, Senate Committee on Media and Public Affairs, in a separate interview with one of our correspondents, said the communication would undergo legislative process before getting to the President.

He said, “Allow us to do our job. This thing (rejection) just happened yesterday (Thursday). There is a procedure for the communication. We took the decision yesterday. Is the letter not going to be written? Is that the only issue that they (Presidency) have to deal with?

“This thing happened yesterday and who should do the communication? Is it not the clerk? Between yesterday and today, are there not so many things to be done? Is that the only thing we have ahead of us?

“We have taken our decision and the procedure for communicating it is there. Allow it to happen. Wait till next week and see whether it will be communicated (to the Presidency) or not.”

The Presidency on Friday said Buhari would wait for the Senate to formally communicate its position on Magu’s case before taking a decision on the matter.

The Special Adviser to the President on Media and Publicity, Mr. Femi Adesina, said this in an interview with one of our correspondents.

Adesina said until the President receives the formal notification, no decision would be taken on the matter.

The presidential spokesman said, “You will recall that what the Senate said was that it will communicate the lawmakers’ position on Magu’s nomination to the President.

“President Buhari is still waiting for that communication. When he receives it, he will decide on the next line of action.”

In a related development, barely 48 hours after calling on the President to immediately sack the Secretary to the Government of the Federation, Babachir Lawal, over his alleged involvement in a contract scam, the Senate has set in motion a machinery to ensure strict compliance by the Presidency to all resolutions reached by the National Assembly.

The decision to ensure compliance on the path of the executive arm of government led to the constitution of the Senate Committee on Legislative Compliance, which was inaugurated on Thursday evening.

President of the Senate, Bukola Saraki, while delivering his inaugural speech, said the inauguration of the committee was to ensure that “the resolutions of the upper chamber of the National Assembly are not abused” by the executive arm of government.

According to Saraki, one of the responsibilities of the committee is to “ensure that some of the laws passed by the National Assembly are strictly adhered to” by the relevant ministries, departments and agencies of government.

The Chairman, Senator Babajide Omoworare, in his remarks, said the Senate Committee on Legislative Compliance was constituted in accordance with the provisions of Section 62(1) of the 1999 Constitution as amended, and in compliance with Chapter XIII of the Senate Standing Order.