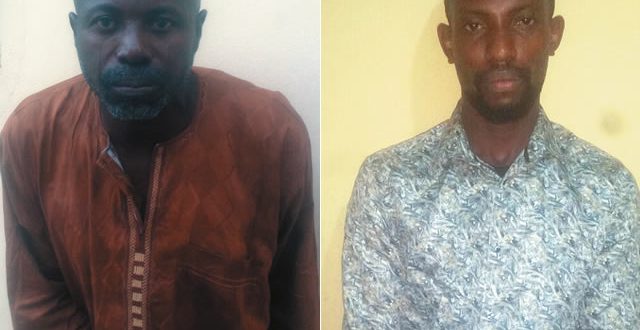 I Can Rob Any Taxi Driver With Ordinary Biscuit – Suspect

December 17, 2016 Comments Off on I Can Rob Any Taxi Driver With Ordinary Biscuit – Suspect 18 Views

In fact, Ibrahim, a native of Otukpo, Benue State, believed his robbery method was so fool-proof that he did not think he could ever fail.

The suspect’s simple and seemingly harmless way of dispossessing taxi drivers of their vehicles, took him across Abuja, Benue and Kogi states, where he operated until the long arm of the law caught up with him.

When he was apprehended, Ibrahim, who is now being held at the Force Headquarters, Abuja, told police investigators, “With only biscuit, I can rob any taxi driver. I usually lace the biscuit with drugs.”

When Ibrahim was caught by operatives of the Inspector-General of Police Intelligence Response Team, eight vehicles were recovered from him. They were the remaining of many vehicles he stole and had yet to dispose of.

Ibrahim’s last victim, whom he robbed in Abuja, reportedly provided the police with information that led to him being tracked down in his hometown of Otukpo, where he was hiding out in a car dealership filled with cars from his victims.

A police source said Ibrahim had robbed the victim after giving him tea and biscuit that had been laced with drugs.

Ibrahim said in the statement he made to police investigators that he was married with four children and started his criminal activities just few months ago, when he realised robbing taxi drivers was not that difficult.

The suspect said he discovered the method of drugging taxi drivers by chance.

He said, “It all started when I chartered a cab from Makurdi to Gboko. On the way, I stopped over at a restaurant to buy food, part of which I offered to the driver. We bought Semovita and drove to a place and started eating. He started feeling dizzy.

“I then took out his floor mat from the car and told him to sleep on it. But before he slept off, I took the car key. As soon as he slept off, I drove the car, a Volkswagen Golf 3 to Otukpo and I sold it to a man called Chiama for N500,000.

“Fourteen days after I robbed that driver, I travelled to Abuja and boarded another cab. I asked the driver to take me to Sheraton Hotel. I paid him when we got there and asked him to wait so he could take me back. I entered the hotel to make him think I was rich. But I went to the pool side and sat there for some time.”

Ibrahim said after a while, he went out to meet the driver and told him to take him to another hotel.

When they got there, he said he paid for a room and told the driver to follow him inside to collect his fare.

The suspect said, “Once inside the room, I told him I needed to eat something fast and asked if he wanted something to eat too. I brought out bread and biscuit from my bag. I had already put some sleeping drugs on them.

“I took one of the biscuits and gave the rest to him, which he took and ate. Soon after, he slept off. I then took his key and left with the key. I drove the vehicle to Kano State and I sold it to one Abdulrahman for N600,000.”

However, the police said Ibrahim’s undoing was his last victim’s phones, which he took away and gave out as gifts to his in-laws.

He was said to have given one of the phones to his mother-in-law, and the other to his sister-in-law, who were none-the-wiser about the criminal activities of their benefactor.

As soon as Ibrahim’s victim gave vital information to enable the police to track the phones, the mother-in-law and her daughter were quickly located. Soon after, they led the police to Ibrahim.

The police have said Ibrahim would soon be charged to court as soon as investigation is complete.

Meanwhile, IRT operatives have also arrested Saturday Jackson, one of the leaders of Port Harcourt’s notorious gangs, the Islanders.

Jackson had allegedly led the Islanders on many kidnappings and cult-related killings in the Rivers State capital and other adjoining cities.

Saturday PUNCH learnt that when Jackson was arrested at Abuah area of Port Harcourt, a locally made rifle and a pump-action gun were recovered from him.

A police source explained that the IRT had received many complaints about the violent activities of Jackson’s gang, which had also become a source of worry to the Rivers State Government.

The violence of the gang was intensified because it is said to be locked in a supremacy battle with a rival gang, the Greenlanders.

“His boys have coordinated several armed robberies around the state. Acting on information about him, we were able to piece together a strategy that allowed us to track him down and arrest him,” the police source said.

Jackson, who is now answering questions on the activities of his gang, explained that his gang operated with two pump-action rifles and two Dane guns.

“Our main activity was kidnapping. We kidnapped two people in February, Mr. Solo and Mr. Barrister. They are both from Abuah. Solo paid N200,000 as ransom while Barrister paid N500,000.

“Before we became kidnappers, we were actually vigilantes. I was employed by one of the men we kidnapped in February but when he refused to pay my boys and I, we kidnapped him.”

Jackson said he and members of his gang recently submitted some of their arms when an amnesty was announced by the Rivers State Governor, Nyesom Wike.

He denied ever killing anybody during his gang’s operations but explained that he and his men were always at war with the Greenlanders.

The IRT Commander, Mr. Abba Kyari has said efforts are still being made to track down other members of Jackson’s gang.

Share
Previous Buhari Gives Daughter Out For 12 Gold Coins Dowry
Next Azazi, Yakowa And Oronto: An Enigmatic Twist Of Destinies