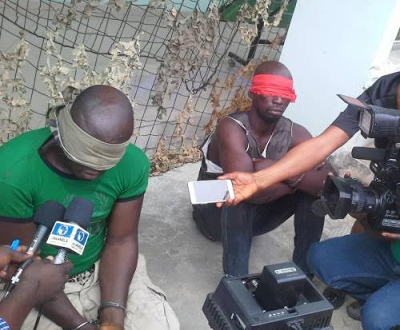 The joint military force, Operation Delta Safe, deployed to the Niger Delta, says its troops have arrested two militants believed to be masterminds of recent attacks on oil infrastructure in the region.

According to Admiral Apochi, the suspected militants are popularly identified in the Niger Delta creeks as “General Eagle” and “General VIP.”
He said that the arrest of the suspects, who had allegedly admitted to being the brains behind attacks at Agip’s oilfields in Bayelsa State, was as a result of the tenacity of operations launched against vandals by the joint force.

He noted that the activities of the two arrested militant suspects was responsible for the slump in oil output following several attacks and threats to oil firms.

“I am glad to announce that two notorious kingpins identified as General Eagle and General VIP have been apprehended. From interrogation, they have admitted to committing several crimes,” said the commander.

He added: “The criminals and their group have at various times masterminded the destruction of oil infrastructure and sabotage to the economy.

“They have engaged in illegal bunkering and kidnap of high profile victims.

“The self-acclaimed General Eagle said he recently organized and blew up one of the oil company’s risers at Golubokin along Obama-Brass pipeline in Bayelsa. He also claimed responsibility in the planting of explosives at Agip’s oilfields.”  Suileman said.

The commander said that preliminary investigations had uncovered text message threats to oil firms and their staff, adding that the suspected militants declared their intention to carry out more attacks if their demands for financial gratifications were not met.

He said that troops acting on actionable intelligence raided the militants’ hideouts in Yenagoa and arrested three other suspects currently being interrogated.

He said that one of the suspects in the custody of the joint task force claimed during interrogation to be a pirate and “pipeline bleeding expert” responsible for the destruction of several oil facilities.

Admiral Apochi urged aggrieved groups to take advantage of the federal government’s window of opportunities to amicably resolve grievances rather than resorting to criminal acts.

He assured that the military would not relent until the region was sanitized of criminals. He solicited the support of the public through the provision of timely and credible information required to identify and flush out criminals.

He also assured that steps were being taken to ensure a crime-free Christian season as patrols have been intensified on the East-West road as well as the waterways in the Niger Delta region.