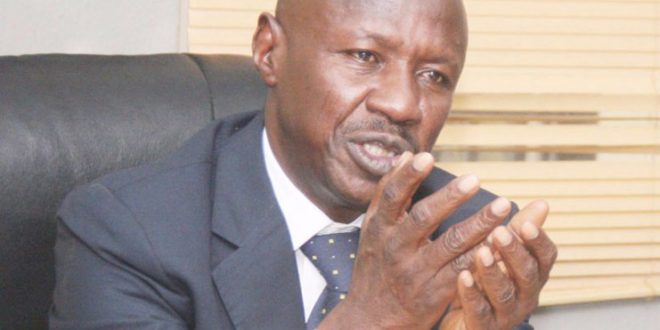 December 16, 2016 Comments Off on How DSS Report Indicts Magu For Corruption…. 9 Views

More facts have emerged on Thursday  as to why the senate rejected the confirmation of Ibrahim Magu as the substantive chairman of Economic and  Financial Crimes Commission (EFCC).

It was gathered that a report by the Department of State Security(DSS) revealed the double life  and corruption of   Mr. Magu, as the reasons by the Senate for its refusal to confirm him as the substantive chairman of the anti-graft agency

The leadership of the senate has asked President Muhammadu Buhari to send the name of a fresh nominee for its confirmation, but gave the nod for the screening of other nominees of the commission by its anti-graft committee.

Explaining  why the senate declined to confirm Magu, the  spokesman, Sabi Abdullahi,  cited  unfavourable secrity report as the reason for his rejection
“This is an official statement from the Senate of the Federal Republic of Nigeria. It’s the statement on the confirmation of the nomination of the chairman and members of the Economic and Financial Crimes Commission (EFCC).

“The Senate of the Federal Republic of Nigeria wishes to inform the general public that based on the security report available to the Senate, the Senate cannot proceed and confirm the nomination of Ibrahim Magu Mustapha as the Executive Chairman of the EFCC.

“Accordingly, the Senate hereby rejects the said nomination and has returned the said nomination to Mr. President for further action,” Abudullahi said.
Abdullahi, however, tried to avoid questions from journalists on why it had taken the Senate this long to arrive at the decision and why it also took the parliament almost two hours before making its decision public.

But following the insistence by journalists that the Senate must explain its decision, Sabi said: “There’s no confusion here. We have said it was based on a security report. Please, all of us public officers go for security screening, everybody!

“And we are saying that based on a security report, we cannot proceed and confirm him and we are rejecting his nomination and returning it to Mr. President for further action, that’s just the statement. It’s as simple as that.
“That’s exactly what the Senate has said and I don’t have any other explanation more than this.”