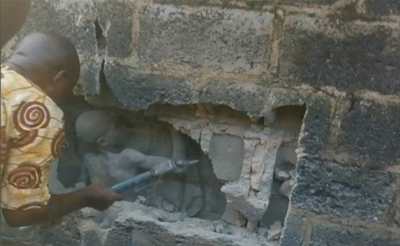 December 14, 2016 Comments Off on Real story of the boy found inside a wall in Ondo state 252 Views

Last week, a boy who was reportedly 12 years old, who was sealed in the wall of a house in Ondo state was rescued.  Several reports emerged as to how he ended up inside the wall of the house which looked old and dilapidated, none of which made much sense. However, Channels TV crew visited the sight of the incident to find out what the people in the town really knew about the boy and the weird incident. The boy was identified as Aduragbemi Saka.

According to Channels TV, the house where the boy was found is located at 3B Akinfemisoye Street, Oduduwa Area in New Town, Ondo State.

The owner of the house reportedly travelled out of the country several years ago, so wasn’t at the location of the incident when it happened, but the building was being occupied by students of Adeyemi College of Education. 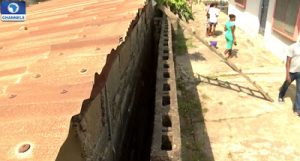 According to residents of the area who knew the boy, he lived with his grandmother and is mentally challenged. They said he ran away from his grandmother as she was taking him to Church for healing and that he probably fell into a little space between the walls of the house and a food canteen next to it, by accident.
Residents said they heard a voice talking within the wall saying that he was Judas Iscariot and that he was the one who killed Jesus.
They said they initially ignored the voice, but then the next day , they heard the voice within the wall singing so they contacted the Police before they broke the wall and rescued him.
Prophetess Dorcas Adebayo who was the one healing the boy explained in Yoruba language that the grandmother brought the boy for healing but later took him away from the church.

After the boy was rescued, he was taken to his Grandmother, a little boy interviewed by Channels TV said Aduragbemi was taken to State Specialist Hospital in town.

Hospital sources confirmed that the boy had been admitted but had since been discharged.