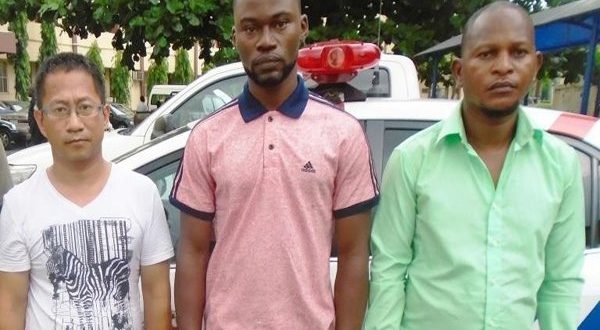 December 12, 2016 Comments Off on RRS’ Raid of Fake Embassy In Lagos, Arrest Four- The Nation 18 Views

The operatives, led by RRS Commander, Olatunji Disu, an Assistant Commissioner of Police (ACP) stormed the fake embassy located at Golden Point and Suite Hotel, Duduyemi Street in Ejigbo, after receiving complaints of fraud from victims.

The suspects – Liu Honyang, 47, Sun Xinai, 49, Oriyomi Olawale, 47 and Desmond Chinedu, 25 – were said to have conspired and swindled Nigerians who had planned to travel out of the country to seek greener pastures.

The police were said to have lodged in the hotel for two days monitoring their activities before apprehending them.

A victim, Adekunle Adefuye, told RRS operatives narrated how he was lured to go to Trinidad and Tobago by the suspects and was later deported.

He said: “I met these people through one of their agents, Dorcas Slyver. She is a daughter to my brother’s pastor in Abeokuta. I told her my intentions to travel to United States. Then she told me to come to Lagos that she can procure the American visa for me.

“Initially, I declined to take their bait, insisting that I preferred America. But in the long run, they brainwashed me into agreeing to go to Trinidad and Tobago. It was at this point, I was told that I would pay N1.3 million for the whole process including visa processing and flight fare.

Continuing, the victim said he and another person were rounded up immediately they got to Trinidad and Tobago by the country’s immigration officers for coming into the country with fake visas.

“We left Lagos en route Lome on October 19. From Lome to Sao Paulo in Brazil. From there, we moved to Panama where we boarded another plane to Trinidad and Tobago. On getting to the country, we were arrested by their security operatives, accusing us of entering their country with fake visa and documents.

“We spent two days underground inside police custody. They treated us like criminals, trying to enter the country illegally. We were locked up for 48 hours before we were deported on October 22, and arrived Nigeria the following day.”

Another victim, Rasheed Ololade, said he also paid N1.3m into Dorcas Sylver’s account, after persuaded him to go to Trinidad.

One Lukmon Odeyemi, a footballer said he parted with N125,000 for Trinidad and Tobago visa.

Meanwhile, one Friday Owah, who was at their office when they were apprehended, disclosed that he paid N600,000 to go to Trinidad and Tobago.

In the course of investigation, the police were said to have contacted the High Commission of Trinidad and Tobago in Abuja, which replied by denouncing the so – called agents.

A letter dated December 7, referenced ABJ: 6/2/3/14 and signed by Garth Lamsee, Acting High Commissioner for that country said: “…the Mission can categorically confirm that the individual SUN XINAI who is claiming to be an agent of this mission is unknown to us. Furthermore, this mission does not use the services of an ‘agent’ in any capacity whatsoever and has never done so in the past either.

“With regard to the authenticity of the attached visas, the mission can also categorically confirm that those visas were not issued at this High Commission and are clearly fraudulent…Noteworthy too is the fact that since June 2015, this mission had stopped issuing stamped visas in passports for individual electronic visas from our country’s capital Port of Spain.”

Confessing to the crime, Honyang said: “We operate as separate travel agencies under the company’s name, Golden Point Hotel and Tour but our office is located inside the hotel.

“Sun Xinai is my sister and she is the director of the travel agency. I only do paper works and documents for visa procurement. I don’t know how she secures visa for people. What I know is that she travels to Abuja and comes back with that stamped visa.”

But Sun Xinai, the major suspect, noted that she was unaware that stamped visa for Trindad and Tobago was no longer tenable in that country anymore.

Police spokesperson Dolapo Badmos, a Superintendent (SP) said command was on the trail of all their agents and canvassers, adding that the public should be wary of fake visa agents.

All the suspects have been transferred to the State Criminal Investigation Department (SCID), Panti, Yaba, for further investigation
Culled from The Nation neewspaper