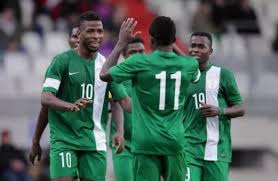 Super Eagles has started their journey to 2018 World Cup in Russia with a victory over the Chipolopolo Stars of Zambia.
The Nigeria super eagles defeated Zambia by 2-1.

This victory has seen Nigeria toping the Group B in the World Cup qualifiers with 3 points.

In the 33rd minute into the game, Arsenal striker, Alex Iwobi put Nigeria in a lead with volleying the ball into the goal post from a throw-in which the helpless Zambia defence could not hold.

Ten minute later, it was 2-0 courtesy of Manchester City striker, Kelechi Iheanacho scoring a spectacular goal
In the 71st minutes, the Chipolopolo Stars made a comeback when Collins Mbesuma scored a goal For Zambia from close quarters after Nigeria defender, Kenneth Omeruo bungled fumbled in an attempt to clear the ball wide.

The match ended with a 2-1 goal tally in favour of Nigeria.

Nigeria will face Algeria in the next qualifier on November 7 in Port Harcourt, rivers state.