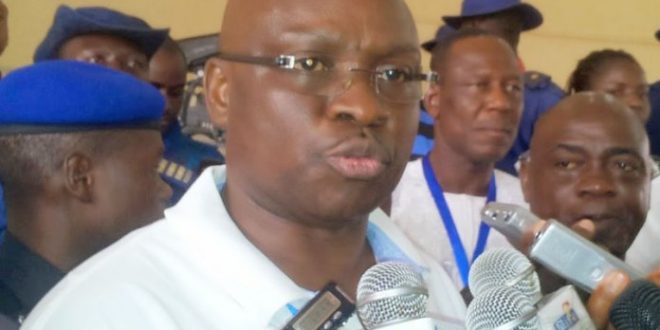 I Am The Real Change, Says Fayose

Ayo Fayose, governor of Ekiti state, has declared himself “the real change”.

The catchword ‘change’ was what the All Progressives Congress (APC) sold to Nigerians in the buildup to the 2015 general election, which it was largely successful in.

But Fayose, fierce critic of the APC, appropriated the catchword on Wednesday when he hosted teachers at the Oluyemi Kayode stadium in Ado-Ekiti, the state capital.

At the even meant to commemorate the World Teachers’ Day, he displayed a poster bearing the inscription: ‘Fayose The Real Change’.

Fayose donated N50 million to the teachers, saying the gift was in recognition of the sound performance of the state in the just released NECO results.

Ekiti had the best result in the country.

He ordered that the money be shared equally among all of the teachers irrespective of grade and status, and directed the state accountant-general to ensure that each of the beneficiaries received his or her own share on or before Friday.

Fayose said the gesture was aimed at spurring the teachers on to greater achievements in the years ahead.

He urged all the teachers to further ensure that their students perform well in both NECO and WAEC in subsequent years by keeping the flag flying.

Aside the cash gift, two teachers adjudged to be the best in the outgoing year, at secondary and primary levels, were given brand new KIA RIO cars.

“I am doing all of these because Ekiti’s name has been brought under world focus once again, and it is my wish that our current academic feat be repeated over and over again, after all to whom much is given, much is expected,” he said.

Afe Babalola, an erudite lawyer, emphasised the inportance of quality education in the development of any nation.

Kayode Akosile, chairman of the Nigeria Union of Teachers (NUT), advised the government to pay adequate attention to the welfare of teachers as an incentive for greater feats.

Share
Previous Erisco Foods Threatens to Shut down Operations, May Sack 1,500 Workers
Next NFF Owns Up: We Are in Distress