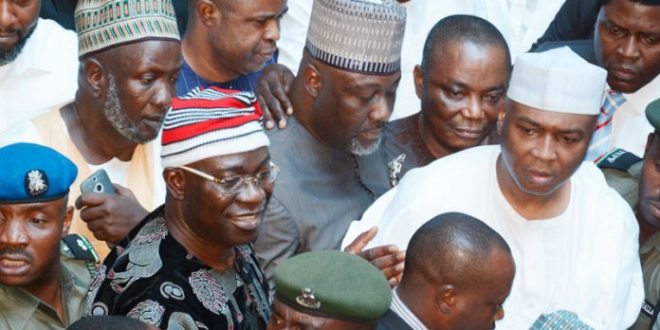 For the second time, the Chairman of the Code of Conduct Tribunal (CCT), Mr. Danladi Umar, wednesday declined an application to recuse himself from the trial of the Senate President Bukola Saraki over a statement made by Umar, which the Senate president claimed was prejudicial to his trial for false declaration of assets.

However, Umar admitted that the statement was a mistake saying: “As human beings, we are bound to make mistakes and only the Almighty God is infallible.”

On this basis, Saraki, through his counsel, accused the chairman of open bias and asked him to recuse himself from the trial.

However, Umar yesterday said that the comment was made with a “free mind and without prejudice to the Senate president and the trial”.

Umar said he was surprised that since the statement was made, nobody had bothered to find out the veracity of the comment.

He said: “We will give an account of our deeds on earth to God on resurrection day and we must therefore be fair and just in anything we are doing while on this earth.”
Umar held the view that his remark was not intended to prejudice the defendant and that the tribunal would move on in spite of the criticism that had trailed the comment.

He also said that as the chairman, he could not afford to step down from the trial because the Fifth Schedule of the 1999 Constitution confers jurisdiction on asset declaration matters on the tribunal alone and not on any other court in the country.

He further pointed out that Paragraph 51 of the constitution, which established the tribunal, made provisions for the chairman and two other members adding: “The moment the chairman recuses himself from proceedings, the tribunal would collapse because it must have a chairman.”
Besides, he said Paragraph 4 of the Schedule makes it clear that a person holding the office of the chairman cannot be removed from office until the person has reached the retirement age, reminding the defence team that for the president of the country to remove the chairman, he must write to the National Assembly and that the legislature can only act on such request with a two-thirds majority vote.

Umar said that the request that he should step down was not contemplated by the constitution and that the absence of the chairman would naturally collapse the CCT.
He, however, said that the defendant could challenge his ruling on appeal, adding: “Disqualifying myself will be tantamount to bringing the trial to an end.”

He consequently adjourned the trial to November 7 for continuation of trial.
The trial was adjourned with the consent of the lawyers to Saraki led by Chief Kanu Agabi (SAN) and those of the federal government led by Mr. Oluwaleke Atolagbe.

At yesterday’s proceedings, Mr. Rotimi Jacobs (SAN), who was billed to lead the prosecution team, was said to be attending another court matter at the Abuja High Court.
Atolagbe, who represented him, told the tribunal that his principal would join the trial but could not specify the exact time he would turn up.

Saraki had earlier pleaded not guilty to the 16-count charge of false assets declaration. This is the second time he would ask the tribunal chairman to disqualify himself from further participation in the trial over allegations of bias.
The tribunal chairman has rejected both applications.

In another case, the Office of the Attorney General of the Federation yesterday said it was yet to take a decision on the judgment of the ECOWAS community court, which ordered the immediate release of the detained former National Security Adviser (NSA), Col. Ibrahim Dasuki (rtd).
Mr. Othman Isah, the Special Adviser to the Minister of Justice, Abubakar Malami, said that the justice ministry was still studying the judgment and would take a decision as soon as the judgment has been digested.

The judgment of the ECOWAS Court cannot be appealed, but an aggrieved party may ask the court to review its decision.

The court had held that the detention of Dasuki violated both national and international laws on the right of persons and citizens to freedom of liberty.
Justice Friday Chijioke Nwoke, who delivered the judgment, also imposed a fine of N15 million against Nigeria as compensatory damages.

In the judgment that lasted over one hour, the court dismissed the allegations of unlawful possession of firearms and economic crimes used by the federal government to justify the detention of Dasuki, adding that the Nigerian government missed the point, because the applicant applied before the court for the enforcement of his fundamental human rights.

Justice Nwoke held that even if the applicant had committed a crime, the law still requires that due process of the law must be observed in his trial, adding that it was an established fact that the applicant was put on trial in three different Nigerian High Courts and was granted bails by the courts.

The court said that the action of the Nigerian government in subjecting the ex-NSA to indefinite detention without trial was condemnable because criminality had not been established against him.
But as the federal government takes its time studying the ECOWAS ruling, it finally agreed to consolidate the criminal charges filed against Dasuki and others before two different High Courts of the Federal Capital Territory (FCT).
The decision to consolidate the charges followed a complaint by the former NSA that putting him on trial in two different courts on the same issues would prejudice and cause him double jeopardy.

At the resumption of the trial wednesday, counsel to the federal government, Mr. Rotimi Jacobs (SAN), and that of Dasuki, Chief Joseph Daudu (SAN), agreed before Justice Baba Yusuf to formally write the Chief Judge of the FCT judiciary, Justice Ishaq Bello, to consolidate the two charges in the interest of justice.

The prosecution and defence lawyers consequently applied to Justice Yusuf to adjourn the matter pending the time the chief judge considers the application for consolidation of the charges against the former NSA.

Justice Yusuf, who was billed to give ruling on Dasuki’s motion for consolidation yesterday, put off the ruling as a result of the understanding between the prosecution and the defence, and adjourned the matter till October 21, 2016.
Dasuki was charged before Justices Yusuf and Peter Affen both of the FCT High Court on similar charges.

However, Dasuki, alleging abuse of the judicial process in his trial, applied for the charges at the two courts to be consolidated since they were on the same issue and alleged contravention of the same laws.

He and others are standing trial before Justice Yusuf for alleged misappropriation of about $1.2 billion meant for the procurement of arms.

Share
Previous NFF Owns Up: We Are in Distress
Next IMF Predicts Nigeria Will Be Out of Recession By 2017