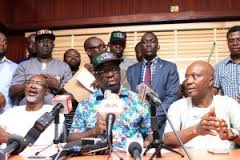 I Will Not Appoint Any PDP Member As Commissioner- Obaseki

October 2, 2016 Comments Off on I Will Not Appoint Any PDP Member As Commissioner- Obaseki 16 Views

Edo state governor –elect, Godwin Obaseki has said he would not appoint a any member of opposition party into his government.

Obaseki speaking with reporters in Benin on Saturday said it is clear he has to hit the ground running.

He said hs first assignment will be presentation of budget to the house of assembly.

“I will not be able to accept anybody from the opposition as a commissioner in my cabinet,” he said.
“My first assignment is to put together a team and get appropriation for next year because we have to hit the ground running.”
He said his government government will focus on job creation and education as outlined during his electioneering campaign to create 200, 000 jobs
“The focus will not change in terms of infrastructure and education. The added focus will be on job creation and empowerment,” he said.
“We will continue to build roads and refurbish schools. What is important is how to get people to work.”

Share
Previous What Nigeria Means To Me By Reuben Abati
Next Emefiele Confirns Wife’s Release, Gives Gratitude To Buhari