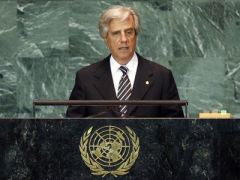 Addressing the United Nations General Assembly, Uruguay’s President Tabare Vazquez on Tuesday warned on the direct cost of smoking on Latin-American health systems, citing it  at US$33 billion, and the economic cost of cancer in Mexico, the Caribbean, and Central and South Americas at US$286 billion.

According to the Uruguay president Tabare Vazquez said Uruguay is a world leader in the implementation of the World Health Organization (WHO) Framework Convention on Tobacco Control, he said.

Tabare Vazquez said that the Big Tobacco “main reason was to punish a small country which has decided to control tobacco consumption” as a warning to all. The best way to move forward is to invite all countries to implement Framework Convention with “no fear of threats or retaliations from powerful tobacco companies.” he said

Share
Previous Buhari invites UN as negotiator with Boko Haram in releasing the Chibok girls
Next Aregbesola sings for Sunny Ade at 70, Says Juju maestro Is A Bundle of Talent