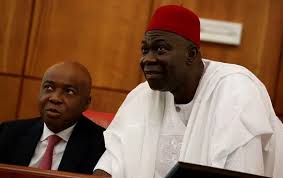 Some senators on Wednesday kicked against the call by some Nigerians for the sale of the nation’s assets as a means of surviving the current economic recession.

The senators, who spoke on the floor of the senate during a debate on the state of the economy, also called for constitutional amendment to stop sharing of all revenue accruable to the federation account.

Business mogul, Aliko Dangote, had called for the sale of the assets. Senate President Bukola Saraki also made the call during his welcome address on Tuesday.

However, Ike Ekwerenmadu, deputy senate president, and George Akume, an All Progressives Congress (APC) senator form Benue state, cautioned against the sale of the assets during the debate.

According to them, no country resorts to selling its assets as a way out of economic recession.

“UAE does not even allow you close to oil wells let alone sell them,” Ewerenmadu said.

“For a country like Saudi Arabia, its budget each year is run by investments from oil revenue. Other countries are investing; I am sure we will not be fair to the next generation if we sell off our assets.

“If we must sell, we have to sell the non-performing assets so that people can turn them around and create employment.”

He said the recession had buttressed the importance of savings, and called for amendment of the revenue sharing formula between the federal and state governments to encourage savings.

“We need to amend section 162 especially from 3,4,5,6 where each money in the federation account is made to be shared,” he said.

He said that the country should focus on recovering stolen funds.

“If we want to sell our oil assets at this time when the price of oil crashed, how much are we going to realise?” he asked.

“We are making a mistake here; what we are doing is to ensure that those who are within the bracket of the stolen dollars will still come to buy.”

Akume said the country should rather focus on industrialisation through agriculture.

He also called for the review of the revenue sharing formula to encourage savings, saying states should not insist on sharing revenue.