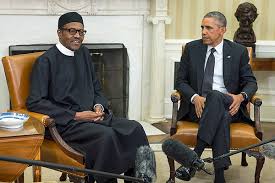 September 18, 2016 Comments Off on Buhari, Obama To Meet As US President Makes Final Appearance At UN General Assembly 14 Views

Presidents Barack Obama and Muhammadu Buhari will meet on Tuesday in New York, on the sidelines of the US leader’s final appearance at the UN General Assembly session.

The 71st UN general session opens on Monday. It will be Buhari’s second appearance since he came to power in May last year.

The meeting confirmed by White House was not on the itinerary of the Nigerian leader released on Friday.

Obama is also scheduled to meet with presidents of Iraq and Colombia.

Some of the discussions Obama will have with Buhari are about continued US support for security and economic changes in the country, as well the government’s efforts to counter Boko Haram.
Nigeria and the US have pending agreement over the sale of US military equipment, especially attack helicopters to fight the insurgents.

In a statement issued in Abuja on Friday, Femi Adesina, special adviser to Buhari on media and publicity, said the president would deliver Nigeria’s statement at the opening of the general debate of the assembly on ‘The Sustainable Development Goals: A Universal Push to Transform Our World.’

Adesina revealed that the president would also attend a high-level summit to be hosted by the UN, on ‘Large Movements of Refugees and Migrants’.

“The summit, which is the first of its kind organised by the general assembly at the heads of state and government level, is expected to come up with a blueprint for a better international response to enhance protection of migrants and refugees.’

He also said Buhari would deliver a keynote address on ‘Taking Climate Action toward Sustainable Development in Nigeria and the Lake Chad Basin.’

The president’s aide disclosed that leaders of member-countries of Lake Chad Basin would attend the summit, organised by Nigerian government, to highlight the urgent need to mobilise international response to the situation in the Chad Basin.

Over nine million people are in need of humanitarian assistance in the Lake Chad Basin.

He said while in New York for the annual gathering of world leaders, the president would attend series of meetings as well as side events, which were of significant interest to Nigeria.

He said that the Nigerian leader would attend the Clinton Global Initiative as well as the United Nations Private Sector Forum on Business and Global Goals organised by the Secretary General.

Adesina said the president would hold bilateral meetings with some world leaders in furtherance of his administration’s commitment in ameliorating the plight of internally displaced oersons (IDPs) in the country.

Share
Previous With Unity, Recession Will Be Surmonted – Dogara
Next Buhari arrives New York ahead of the 71st session of the UN General Assembly