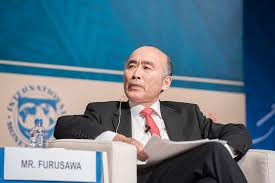 The International Monetary Fund (IMF) says it is available to help economies in sub-Saharan Africa at any time it is called upon.

Disclosing this on Tuesday, Mitsuhiro Furusawa, IMF deputy managing director, said central banks in the region had been facing some challenges that could do with some help from IMF.

“The IMF is fully committed to providing any assistance that the Kenyan authorities and those across Africa may need to continue upgrading the monetary policy frameworks to address the challenges of the future,” he said.

As seen in Nigeria’s economy at the moment, Furusawa said “at times there may appear to be a conflict between the goals of low inflation and economic growth”.

“But we have learned from hard experience that high inflation distorts the private sector’s savings and investment decisions — leading ultimately to slower growth,” he said in Kenya.

“That is why countries have increasingly placed greater emphasis on price stability, and many of them have made low and stable inflation the primary objective for monetary policy.

Speaking on African central banks, he said “new central banks lacked independence from their governments: they were directed to finance large fiscal deficits. There were pervasive foreign exchange and interest rate controls”.

“The weaker relationship between money and inflation, and the changing financial landscape, are again calling on African central banks to adjust their strategies.

“Ghana, South Africa, and Uganda have adopted formal inflation-targeting regimes. Other countries with flexible exchange rate regimes are de-emphasizing the role of monetary aggregates and incorporating elements of the monetary policy practices of industrial and emerging market countries.”

“First, the central bank should have a clear legal mandate of policy goals and operational independence to pursue these goals,” he said.

“Second, the primary, medium-term objective of monetary policy should be price stability. Monetary policy ultimately has a limited capability to directly influence real variables such as output growth over the long-term.

“Fourth, the central bank should carefully take into account the implications of monetary policy adjustments for financial stability. However, this should not come at the expense of undermining the central role of the medium-term inflation objective. Any significant erosion of central bank credibility can change inflationary expectations for the worse. This, in turn, could have an undesirable impact on real activity and financial stability.

“Sixth, the central bank should have a transparent, forward-looking monetary policy strategy that reflects timely and comprehensive assessments of the monetary transmission mechanism.

“Seventh, central bank communications should be transparent and timely. This helps reduce uncertainty, improves monetary policy transmission, and facilitates accountability. The goal must be to build credibility.”