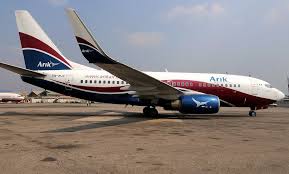 September 13, 2016 Comments Off on Arik Airline Shuts Down Operations 10 Views

Just lik Aero, First Nation, Arik Air has suspended all its operations from today. Over thousands of travellers booked the airline tickets  are currently stranded at both local and international airport in Lagos.

Nigerian Current learnt that both its local and international flights have all be cancelled as well as regional flights to West Africa route.

A passenger with the airline told NigerianCurrent that he was at the airport as early as 5.30am for a 7 :00am flight to Accra but his flight was rescheduled for 5pm and later  was annouced cancelled.

According to  a source, the suspension is due to the inability of the airline  to meet its payment obligations to the major oil  marketers.

Another passenger, Uyi from Benin said he got an SMS from an unknown number rescheduling his flight to Lagos to tomorrow but that was strange  because the airline has an SMS account  where they notify passnegrs on flight status.

An attemtp to reach the communication department of the airline was not successful.