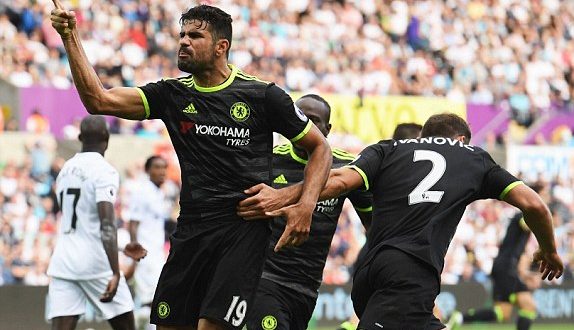 Chelsea was the first team to take the lead in the early minute of their match against Swansea city, after Diego costa put a strike that gave Chelsea the lead in the 17th minute of play. The home team equalised after a back pass by Chelsea defensive midfielder Kante slide pass courtois making him to bring down Swansea front man, this tackle gave the home team a penalty kick which Sigurdsson find so easy to strike pass courtois , not less than 2 minute Chelsea conceded their first goal Fer put a nice strike that gave Swansea city a lead.

The Swansea city goal keeper Luiz Fabianski really put a good effort making so many safes which eventually got them a draw.

This is the fourth game Antonio Conte will be handling as a Chelsea coach since he took over the blues job without defeat.