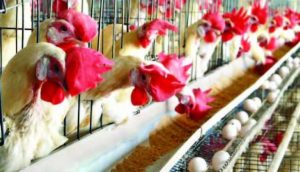 The recent increase in the cost of poultry feed in the country has been forcing farmers to ration food for their birds.
Findings have shown that the cost of ingredients for the composition of poultry feeds, particularly maize, has increased by 100 per cent.
For instance, a 100kg bag of maize, which used to cost about N6, 000 in April 2016, is now being sold for about N12, 000.
Also, the cost of fish meal, another important ingredient in poultry feeds, has increased by 60 per cent. A kilogramme of fish meal that used to sell for N500 now costs about N800.

However, the price of egg in the market has not enjoyed similar increase.
Before the hike in the cost of poultry feed ingredients, a crate of eggs used to sell for N600. It is now being sold for between N650 and N700, depending on the egg size.

This development has led farmers to be rationing food for their birds or mixing their feeds with lesser nutritious ingredients.
This has consequently led to a drop in egg production as malnourished birds do not produce eggs maximally.
Findings also showed that the high cost of maize was due to low cultivation as a result of the activities of Boko Haram insurgents in the north, recurring attacks by Fulani herdsmen and flooding.

This situation was confirmed in the 2016 Maize Outlook by a consulting firm, Novus Agro Nigeria Limited.
According to the outlook, the price of maize hit N65, 000 per metric tonne in January 2016, up from around N45, 000 in October 2015 and has been on steady rise since then.

The Director-General of the Poultry Association of Nigeria, Mr. Onallo Akpa, said the poultry industry in the country was in crisis.
He said, “Last year, Nigeria produced over 14 billion table eggs and was recognised as the number one egg producer in Africa. But we have not been able to calculate the production figure in the last one year because of the crisis we are going through. But surely, our egg production figure has dropped. The industry is being threatened now due to high cost of poultry feeds.
Akpa also said the problem arose as a result of neglect of the agricultural sector and the non-supply of inputs like fertiliser to the “few” farmers in the country.

He said, “Maize was being bought between N4, 500 and N5, 000 per 100kg bag in October/November 2015. But now, it is about N12, 000. Now there is pressure on maize by the poultry industry which consumes over 2.5 million metric tonnes annually. The breweries and other industries also compete with us.”

The Chairman of Dedora Nigeria Limited, Lagos, Mr. Emmanuel Omokwale, said his farm had been recording loss every day.
He lamented that before, his farm used to produce 300,000 crates of eggs per day, but could hardly produce 1,000 crates now because of the rise in the prices of raw materials.

He said, “The prices of raw materials keep on increasing every day. Maize is a major example. I have been in this business for over 25 years, I have not bought maize above N80, 000 per tonne. But the price is now N180, 000 per tonne. With the way it is going, only God knows when it will end.

Omokwale added that the foreign exchange crisis, increase in fuel price and high interest rate have also contributed to the problem the poultry industry is facing.

“We are not breaking even because we cannot meet the cost of feeding the birds. In my farm, I provide water, electricity, labour and security. For instance, I buy diesel at N200 per litre and I use a minimum of 200 litres of diesel per day, that is, N40,000 on diesel alone daily,” he said.

Omokwale added that these problems had led to a sharp decline in the production of eggs on his farm.
He said, “We can’t meet demand for eggs because we don’t have enough birds. We don’t have the capacity to stock now. The problem is that the more we produce, the more we lose. We cannot just expand because to feed the birds alone is difficult.
“Some poultry farms ration the feeding of their birds. But the problem with that is that if you adopt that method, you will be worse off. That is why you have to cut down your stock. It is too expensive to stock now. Everybody will soon see the effect of what is happening now in the country.”

He said, “How do you feed your birds when the cost of raw materials is increasing every day? The best thing is to reduce your stocking capacity. A kilogramme of maize cost N44 before, but it is being sold for N105. So, if you are buying 100 kilogrammes of maize, you need N105, 000 to do so unlike before when it cost N44, 000.

“But in spite of the rise in the cost of raw materials, poultry farmers cannot increase the price of eggs. Vaccine is another problem. You are to vaccinate your birds. Some farmers are rationing food for their birds just to keep them alive because of these problems.”
A poultry farmer in Ibadan, Oyo State, who has about 2,000 birds, Mr. Isaac Oguntuase, said he had started rationing feeds for his birds because of its cost implication and the financial crisis he was going through.

He explained that the adequate quantity of poultry feeds required daily for his birds is 250kg as each consumes an average of 125 grammes of food per day.
He said, “I can tell you that the cost of poultry feed has increased by 100 per cent. My birds have not been eating as they should; instead of giving them 250 kg of feed daily, I have reduced the ration to about 200kg.

“But the problem with that is that their egg production has dropped by 30 per cent already. If birds don’t eat well, they won’t produce eggs as they should and the little they produce might also be small in size.”
A poultry farmer in Ogun State, Mr. Johnson Anwuzie, said he had been substituting maize with dried garri (koko) and fish meal with soya beans.
But he noted that the move had reduced his birds’ egg production rate. Instead of an average of 180 crates of eggs daily, Anwuzie has been getting less than 140 crates since he started adulterating feed for his birds.

“I have been losing a lot of money because of the high cost of maize and its unavailability,” he said.
A poultry farmer in Ogbomoso, Oyo State, Mr. Oladapo John, said he had reduced the stock of fowls on his farm.
He said, “Instead of adulterating their feed, I have reduced the stock of fowls on my farm. But unlike before when I used to produce 100 egg crates on my farm, I only produce 30 now.”

A poultry farmer, Mr. Azeez Gbolahan, described the rising cost of feeds as disturbing, saying the trend has had enormous effect on his business.
Gbolahan, who rears layers and cockerels, lamented that in spite of the increasing cost of the feeds, any attempt to increase the price of their products would lead to loss of customers.

He said, “The prices have skyrocketed. It is killing the business and eating into our profit. For instance, at the beginning of the year, a bag of layers mash was around N2,200, but now it’s N2,900. It was about N2,650 just three weeks ago, but now it has increased again.
“Painfully, you can’t just increase the prices of your products like that, else you will lose customers. I tried it. I raised the price of a crate of eggs from N700 to N750, but I lost a lot of customers as a result.”

Findings by Saturday PUNCH also showed that many poultry farmers are moving out of the business as it has become difficult to sustain their farms under the current circumstances.
For example, a farmer with about 1,000 birds in Ibadan, Oyo State, Mr. Busuyi Olalekan, said he was already searching for a buyer for his birds and other assets on his farm.

He said, “A lot of farmers are moving out of the business, particularly small farm owners and that is what I’m about to do. The cost of feed has increased drastically, but the price of eggs has not increased considerably.”
An agricultural consultant and Publisher of Farming Advice Digest, Dr. Joseph Deji-Folutile, said in his interaction with farmers, most of them had kept on lamenting a drop in egg production because of the high cost of maize.

He said, “Most of them have been rationing what they feed their birds because more than 85 per cent of poultry production cost is on feeding. A farmer was telling me that he was thinking of closing down because production was not picking up on time. It is from the sale of eggs that farmers make money to remain in business, so once the birds are not producing eggs, they will be running at a loss.

“The major thing is that the maize is expensive and not even available. And when it is available, it is at a high cost and the quality may not even be as high as expected. And when farmers don’t have what they want, they make do with what they have, so it is really a major problem.
“When birds are not well fed, their immune system will not be at peak level and whatever infection they are exposed to will get them down. Maize which gives energy is the major ingredient in feed production, so the high cost of feed and other attendant problems have really affected the farmers.

“I have a client who used to produce about 1,500 crates of eggs daily and because of starving the birds, production went down to about 700 crates. If they get the maize in the right content, it takes some time for the birds to pick up again. These are not the best of times for farmers.”

Likewise, a veterinary doctor who consults for poultry farms, Mr. Adedayo Ojo, said underfeeding poultry birds could affect their immunity and expose them to infections.